Greig Laidlaw felt Scotland showed a growing maturity after bouncing back from another poor start to beat France 17-14 at BT Murrayfield.

The 66,181 crowd must have had a sense of deja vu as Damian Penaud intercepted Peter Horne's pass to run over for the visitors inside two minutes - the third game running that Scotland have conceded in the same timeframe.

The previous weekend's early blow in Nice led to a 32-3 defeat and France looked set to repeat their victory when Penaud went over again 26 minutes in to help put them 14-3 ahead.

But Sean Maitland's try and Laidlaw's conversion narrowed the deficit to four at half-time and an improved Scotland held on for victory after Chris Harris's try put them in front.

And Laidlaw was delighted with the mentality of his side.

The scrum-half said: "We talked about the first 10 minutes and starting well, and we certainly never did that.

"We put ourselves under pressure but the good thing was you could see everyone had clear eyes on the field, listening to what our leaders were saying in attack and defence, and we dug ourselves out of a hole.

"We held good composure just before half-time to score a try, the crowd probably thought we had blown the opportunity but we took our time and scored out wide.

"That gave us a bit of a foothold in the game and we managed to claw our way back in slowly and steadily and got in front, and our defence won us the game in the end.

"It was a big positive for us, that we didn't panic when we never started well, we clawed our way back into the game." 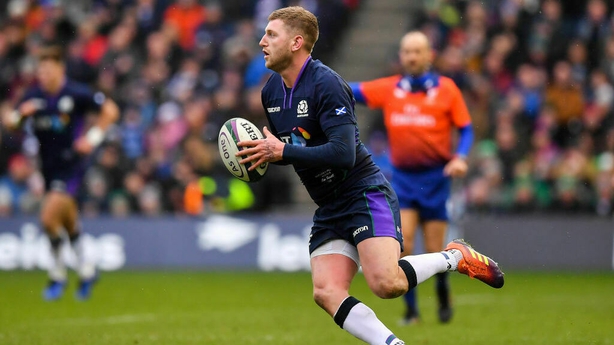 Laidlaw revealed that his half-back partner Finn Russell had been instrumental in delivering some half-time encouragement.

"It was real mature, it's Test match rugby and it's about outscoring the opposition," he said.

"We just built slowly into the game. We were still behind at half-time and Finn talked about our past experience when we were just behind against Ireland at half-time and thought coming into that game we were going to win it, and we never won that game.

"So to take that step and be patient and get another score in the second half and get in front was brilliant to see."

The victory got Scotland's World Cup preparations back on track after the heavy loss in Nice, which prompted Gregor Townsend to make 14 changes.

They now have two games against Georgia to continue momentum ahead of their campaign in Japan.

"The boys were hurting from last week so we were playing for them as well because they never went out there to get that result," Laidlaw said.

"So it was important for the jersey and for momentum as well going into the World Cup to beat a good French team and we have done that.

"Now we can look ahead to the next game away against Georgia, which will be a different test for different reasons, and take some momentum from the last two games going into the World Cup."

There were some injury blows, with Sam Skinner suffering a hamstring injury which could hamper his hopes of being on the plane to Japan. Tommy Seymour and Blade Thomson are also out of the trip to Georgia after suffering head injuries.