The trio picked up injuries during today's gritty 17-14 victory over France and are highly likely to be involved in Tbilisi next Saturday.

Seymour and Thomson look the more likely to recover in time to be named in the final 31-man squad for the World Cup on 3 September, assuming there are  no significant hold-ups as they progress through the head injury return to play protocol.

Skinner is the bigger concern. He was clearly in pain as he hobbled off the field in the 61st minute at Murrayfield with a hamstring injury.

Townsend said: "It is always disappointing when you see someone getting injured and it may mean that they miss the World Cup. Sam Skinner, out of the three, looks to be more of a serious injury.

"He'll get scanned tonight and we'll know more about him later tonight, so fingers crossed for all three players." 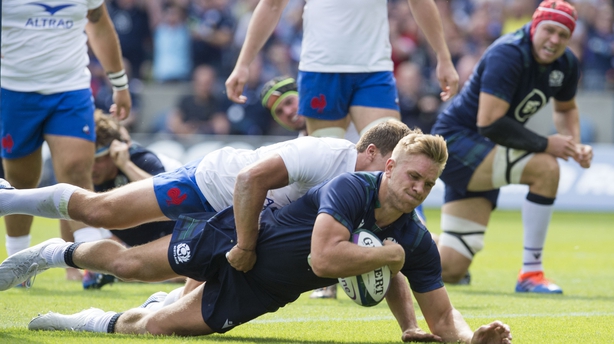 Townsend went on to praise Thomson's performance on his Scotland debut and acknowledged that the fact the New Zealand-born back-row missed most of last season with a head injury adds extra anxiety.

He continued: "He played very well. He was aggressive in defence. He carried well, made the right decisions - when to set up a ruck and when to try and get in behind the defence - so he was excellent.

"I just hope that the HIA [Head Injury Assessment] that he failed means that he doesn't have to miss any more than the minimum time out of the game.

"You look at his history. He obviously had one serious head injury in November and it took him a long time for him to come back before playing two games at the end of the season.

"He has since trained with us and he hasn't had any head injuries in that time but since that one kept him out for such a long time it will be taken into account.

"Tommy failed an HIA, too. He got a couple of hits and the second one was when he started to get symptoms, so he went off the field then and failed his HIA.

"On a wider issue, it will be a real challenge for teams to deal with at a World Cup.

"Normally when you get a calf injury, a rib injury or a dead leg, you know the timeline for people coming back, but with head injuries you don't.

"There is a minimum time but, as you know, people can be out for weeks and months, and we've got to give them that time to come back." 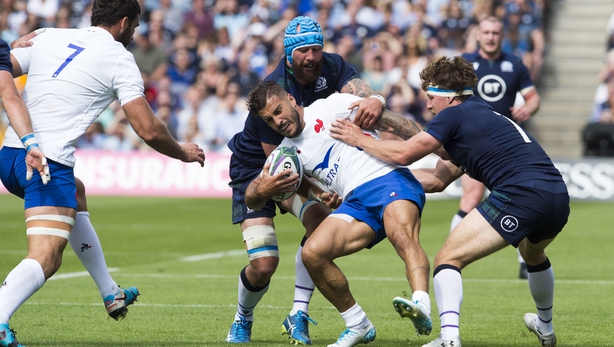 The injuries were a downer on a generally uplifting day for Scotland. Although their performance fell some way short of their fluid best, they managed to squeeze out a win which will go a long way to banishing the painful memory of last week's heavy loss to the same opposition.

The coach continued: "Performance-wise, I wouldn't know what to rank it.

"I felt in the first 20 minutes we were on our game and that wasn't getting shown on the scoreboard because a couple of times France scored off our possession.

"But I just felt that with the bite in the tackles, the speed of ball we were getting and where we were attacking France, it looked like us out there.

"It wasn't the perfect performance - clearly not - but what I found really satisfying was how the players found a way to win.

"Against that early scoreboard, against a team that had beaten them comfortably a week ago, against multiple changes in rhythm with a lot of stoppages and the injuries - having to put John Barclay and Ryan Wilson in the second-row, and George Turner at flanker - what the players did today was excellent.

"But we know that our performance will have to improve a lot over the next few weeks.

"We'll look to pick as strong a possible team either next week or the following week, and that will depend on how players recover from this weekend.

"But the goal is to go to Georgia with a strong side and we'll have to because going to Georgia will be one of the toughest challenges this team has faced. Georgia want to get in the Six Nations, being a very good side, playing at home, the travel to get out there, 50,000 people behind them...

"It is a great challenge for us to go into as we look ahead to playing Ireland on 22 September and the host nation Japan in October."