Last season's defeated finalists Leinster will begin their Heineken Champions Cup campaign with an RDS collision against Benetton on Saturday 16 November, while Ulster head to Bath and Munster travel to the Ospreys.

Connacht, meanwhile, kick off the following day against Montpellier at the Sportsground.

The pool draw was made back in June and pitted Munster against the Welsh region, the holders Saracens and Top 14 giants Racing 92, who travel to Thomond Park seven days after the opening round of fixtures.

Sarries head for France to face Simon Zebo and co for a mouthwatering curtain-raiser.

Leinster, also in with Lyon and Northampton Saints, welcome Benetton to Dublin. The Irish province will come up against a resurgent Saints in the key December back-to-back games.

Ulster have a home showdown with Clermont six days after their visit to the Rec to square up to Bath.

Connacht have Toulosue away the Friday after their meeting with Montpellier, and can look forward to a pre-Christmas double-header with Gloucester.

The pool stages kick off later this year, due to the World Cup in Japan. 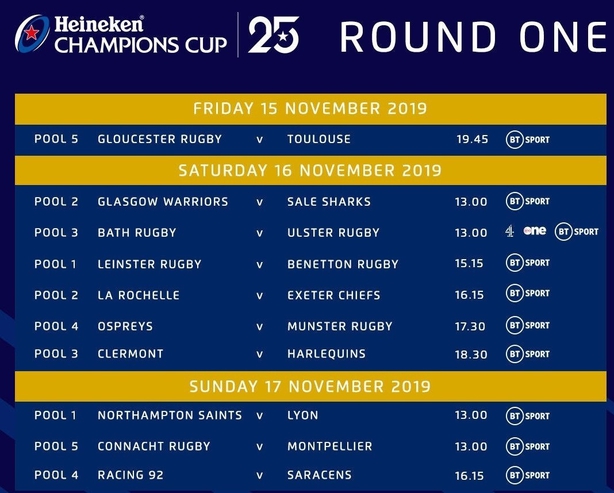