No one expected Ireland to get through a four-game warm-up run without an injury but the hope was that misfortune would not befall a main man.

And as it happens, when Ireland select their strongest XV Joey Carbery is not on the sheet.

But, in old GAA parlance, he's first sub, among the backs anyway.

It’s even more unfortunate because Carbery, who suffered an ankle injury against Italy while winning his 19th cap, doesn’t just provide a like-for-like replacement for Johnny Sexton, the 2018 World Rugby Player of the Year.

The Munster man gives Joe Schmidt different options when it comes to game plans. If this year’s Six Nations taught us anything it’s that an ability to mix it up is going to be vital in forging a path to a World Cup semi-final.

Sexton was probably in line for some action this Saturday against England after recovering from a thumb injury but a heavy hit in training on Monday saw him miss training yesterday.

Risking Ireland’s chief playmaker in Twickenham is now not a luxury Schmidt can afford.

That means it comes down to Leinster’s Ross Byrne or Connacht's Jack Carty to get the nod for a first start for their country.

Byrne was ahead of Carty in the pecking order for last year’s autumn games but a fine run of form for the Connacht player saw him usurp the Dubliner, who made his debut against Italy in November before also appearing as a replacement against the USA.

Carty provided back-up for Sexton during the last three games of the Six Nations (following Carbery pulling his hamstring after the second match) playing 31 minutes over three caps.

However, Schmidt, and skills coach Richie Murphy, both hinted that Carty could have done better after replacing Carbery against Italy two weeks ago, when he played the last 24 minutes. 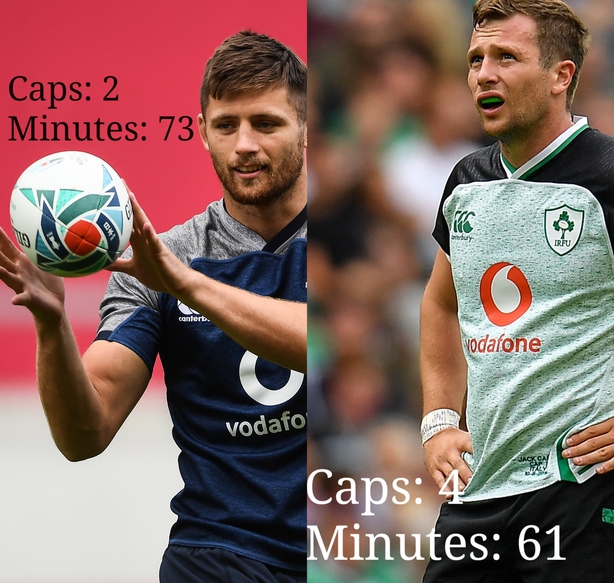 Murphy commented yesterday that "[Carbery's] definitely trying to get back for that first Scotland game, but... we also have to have contingency plans in place."

If Carbery’s recovery goes as planned then he takes a spot on the plane to Japan, that’s a given.

However, the predicament opens up a huge opportunity for one of Byrne or Carty. Without confirming that three out-halves will travel, the injury profile of Sexton and Carbery, and the absence of John Cooney from the squad in Portugal, suggests another fly-half berth is up for grabs.

Former Ireland boss Eddie O'Sullivan doesn't believe that whichever of the two gets the nod when the team is confirmed tomorrow automatically moves up - it's what they show Joe that counts.

"That may have been the pecking order in the Six Nations and everyone felt that it was pretty harsh on Byrne," O'Sullivan told RTÉ Sport.

"Carty took his chance and everyone now assumes that Carty is the number three out-half but if [Byrne] starts it's up in the air again, and Joe Schmidt was a little bit critical of Carty after the [Italy] game.

"I can't imagine that Carty is enjoying his camp this week because it may be out of his control now.

"If Ross Byrne goes out and lights it up there's a chance that Carty will be on his way back to Connacht.

"Carty, in Joe Schmidt’s mind, may have left the door ajar for Byrne but that’s not to say if Byrne starts that he is automatically ahead of Carty. It’s his opportunity to move ahead."

Schmidt is expected to select a strong starting team for the game against Eddie Jones' side.

Lions Conor Murray, Rob Kearney and Keith Earls are all set for a first run-out, while Jacob Stockdale and Robbie Henshaw are due match time.

In the forwards, captain Rory Best, Tadhg Furlong. Peter O'Mahony and CJ Stander are all favourites to start, while Jean Kleyn is in line for his second cap.

Meanwhile, Stephen Ferris, the former Ulster and Ireland back row, has expressed concern that Ireland's frontliners are missing so much action and believes whatever player Schmidt picks at 10 makes the calls for the rest of the team more important.

"Whoever starts at out-half needs to have a very experienced squad around them," he said.

"Twickenham is a difficult place to go. They both deserved an opportunity whether that's 40 minutes each or 50/30.

"I’m not sure if the person who starts is the favourite behind Carbery, that’s Joe’s headache."