Fit-again Mako Vunipola is approaching the best shape of his career - but try telling that to the lady who had to wheel the 122kg prop through Los Angeles airport back in June.

Vunipola has finally recovered from the torn hamstring tendon he suffered in Saracens' Champions Cup final victory in May, and could feature in England's clash with Ireland at Twickenham on Saturday (3pm).

The 28-year-old could not straighten his leg after surgery to fix the tendon back onto the bone, and so had to use crutches and a wheelchair en route to brother Billy's wedding back in Tonga.

While the Lions prop enjoyed his convalescence, he admitted some of those enlisted to help his mobility had their work cut out.

"In terms of bodyweight I'm near enough the lightest I've ever been," said the elder Vunipola brother.

"I feel good about that. Body conditioning-wise it's one of those constant things for me, I've just got to keep working on that.

"In terms of fitness I feel very good. Match fitness is something different. We'll see how I go on the weekend if I get the chance.

"I tore the tendon at the top of hamstring so the muscle became detached from the bone, so they had to go back in and attach that back on.

"For two weeks I was not allowed to strain my hamstring.

"Unfortunately I went to Tonga in those two weeks so it was hard going round on crutches and watching what I eat. Luckily my family helped me through that.

"I could bend my knee but I couldn't lie straight with it. The airport staff looked after me in Los Angeles on the way.

"I was in a wheelchair and some poor lady had to push me. She was struggling a bit! 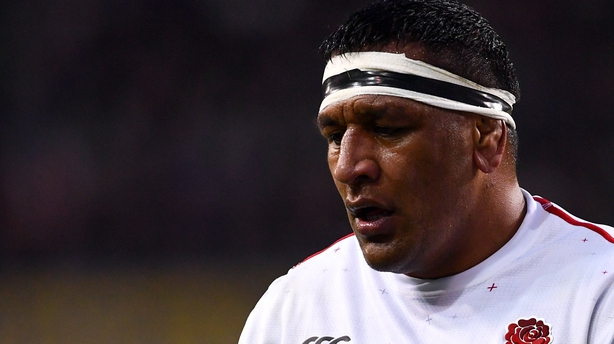 Vunipola is itching to get going after his latest injury setback, and now has the chance to chase full match sharpness, with England launching their World Cup campaign against Tonga on 22 September.

Happy to joke about his experiences now, the combative front-rower also knows full well how injuries can quickly alter a mood.

"I had to put pillows underneath my leg: it was ideal because it gave me an excuse not to leave bed," joked Vunipola.

"I don't need much excuse. I was in bed constantly apart from when I needed to go to the bathroom or the kitchen.

"I had a pretty good setup with the TV and Playstation. For me, it was pretty much heaven. I was ready to get out of bed by the end of it though.

"I needed to move and get the hamstring moving, but I also felt very sloppy by the end of those two weeks.

"You get bigger and you lose muscle - not that you can really tell the difference."

Asked what he weighed at the end of that fortnight off his feet, Vunipola joked he avoided the scales - to stay out of trouble with head coach Eddie Jones.

"I'm excited about being back playing, it's been tough the last four to five weeks training by myself.

"We have talked about not wanting to take anything for granted.