Ireland feel so well-drilled into the Joe Schmidt method that even in the absence of their taskmaster head coach his plans are fully expected to bear fruit.

Head coach Schmidt has spent this week in his native New Zealand following a family bereavement, and may not take charge of tomorrow's World Cup warm-up match against Italy.

The 53-year-old Ireland boss is due back in Dublin come the weekend, but assistant coach Andy Farrell could well pilot operations in the Aviva Stadium clash with the Azzurri.

And if Schmidt does take a back seat on Saturday, back-rower Jordi Murphy sees no reason for Ireland not to get into gear.

"This week, he hasn't been here, and it's not like we've gone back to the drawing board and started trying to recreate everything again," said Murphy, of Schmidt.

"It's just been a pretty smooth transition. So the coaches know exactly what Joe wants.

"I'm sure they'll be in constant contact and we'll just try to move from there.

"We've had a pretty similar week to what we usually would any other time.

"He's our head coach, and you just know Joe's probably been thinking about and planning for this game for about a year.

"So I don't think there'll be any huge change in what we're looking to achieve." 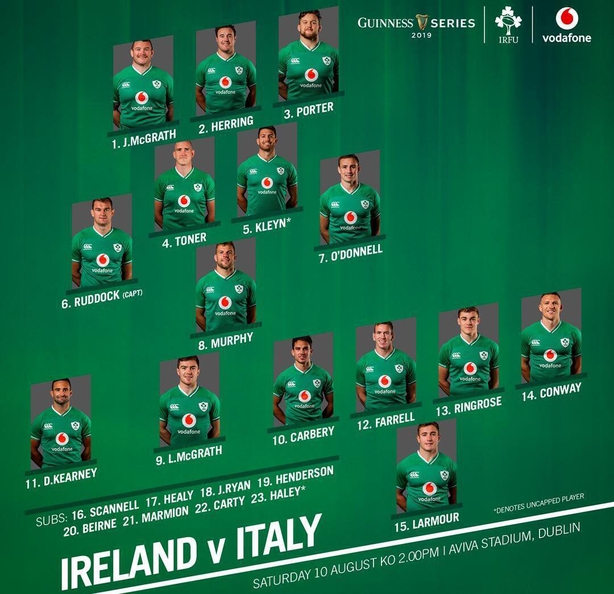 Former England coach Farrell will replace Schmidt as Ireland boss after the World Cup, with the ex-schoolteacher taking a break from rugby to spend more time with his family.

Farrell could find himself with an unexpected dress rehearsal for that future head coaching stint this weekend then, if Schmidt chooses not to lead the team against Italy.

The 44-year-old has plenty of top-level experience, having worked under Stuart Lancaster at England and also with Warren Gatland with the Lions.

And Ulster loose forward Murphy believes Farrell will have no qualms stepping up, either now or when replacing Schmidt after the World Cup.

"He's coached some pretty big teams in the past too. Over the last few days it will have been a glimpse of what things will be like for him.

"But he'll take to it like a duck to water, no doubt; it will be an easy transition for him."