The Ireland rugby team are preparing for more changes off the pitch as they are set to end their long-standing residency at Carton House.

The senior squad have used the Kildare hotel as their primary training base since 2010, but will train for the first time at the newly-opened IRFU facility at the National Sports Campus in Abbottstown at the end of the month.

The only issue over the move is where the senior team will be based during training camps. With no on-site accommodation available, the squad are expected to stay in a Blanchardstown hotel during their upcoming camp, which takes place ahead of their first World Cup warm-up game against Italy at Aviva Stadium on Saturday, August 10.

While building on-site accommodation at the National Sports Campus remains the IRFU's preferred option, there are no concrete plans in place to make this happen, with any such development dependent on a number of factors, including Sport Ireland's future funding plans for the IRFU. Initially, the squad will have no option but to stay off-site.

While there are a number of suitable hotel options in the surrounding Blanchardstown area, the IRFU are not against the idea of continuing to use Carton House as their base and commuting to Abbottstown for training, a journey of less that 30 minutes by coach.

The move comes after the senior squad experienced some issues with the facilities at Carton House in recent months. During this year's Six Nations, the team were forced to reschedule their training plans and travel to the National Sports Campus due to problems with the Carton House pitches following harsh weather conditions. The disruption happened just days before the round two fixture against Scotland.

The facilities in Carton House were not exclusively used by the Irish rugby squad, with various GAA squads also holding training camps there. Earlier this month, Premier League side Chelsea held an early pre-season camp at the hotel.

The IRFU expect to have no such issues at the new National Sports Campus base, which boasts a wider array of purpose built high-performance facilities, including three outdoor pitches, a three-quarter length indoor pitch and strength and conditioning facilities.

Following the Italy game, Joe Schmidt's squad will prepare for further warm-up games against England and Wales with a warm-weather training camp in Portugal. 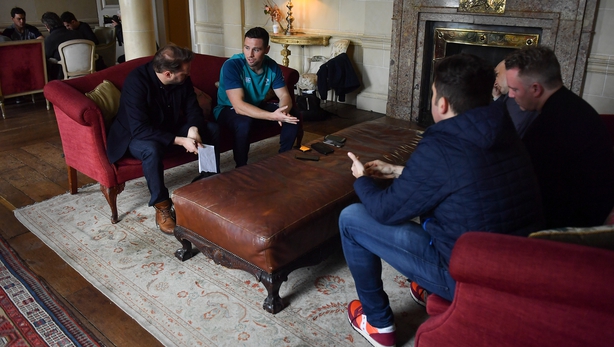 The squad will not hold a long-term training camp at the new IRFU facility until next season's Six Nations Championship, which will be Andy Farrell's first campaign as Ireland head coach.

The facility has already been used by the men's and women's sevens teams, as the IRFU centralise their training programmes.

Meanwhile, Johnny Sexton sat out Ireland's main session in Thomond Park this morning as he continues to recover from a thumb injury. The squad held an open session at Munster's home ground and the out-half, who suffered the injury two weeks ago, was unable to join any team drills, instead working separately with a strength and conditioning coach.

Josh van der Flier, Rory Best, Tadhg Beirne and Will Addison also sat out the main session as they step up their recovery from various injuries.