South Africa and Australia ramp up their World Cup preparations when they clash in their opening game of the shortened Rugby Championship season at Ellis Park on Saturday, for which both sides have made surprise selections.

The Springboks could face Ireland in the knockout stages in Japan in the autumn, if both countries make it out of their respective pools.

Coach Rassie Erasmus has been at pains to explain he has not picked a 'B' side for the contest, but looking at the players he has left out, it is hard to come to any other conclusion.

The likes of key flyhalf Handre Pollard, giant number eight Duane Vermeulen and powerful hooker Malcolm Marx, among others, are all missing, sent instead to New Zealand this week in preparation for their clash with the world champions on July 27.

"There's no disrespect to Australia at all," he told reporters. "If we didn't have the tough draw in terms of travelling with New Zealand and Australia, we would have picked the best first-choice team for this one and the next."

The Boks have an especially inexperienced backline, with scrumhalf Herschel Jantjies making his debut, and only 21 caps between fullback Warrick Gelant, wings Sbu Nkosi and Makazole Mapimpi, and centre Andre Esterhuizen.

Erasmus says he has gone for all out pace with the back three he has selected.

"They tend to try to go around you and we feel with those two (Nkosi and Mapimpi) and Warwick at the back, it's the best combination to try and contain them speed-wise."

The pack has more experience and plenty of grunt, led by 'enforcer' and captain Eben Etzebeth at lock.

Erasmus has also suggested Australia will be more susceptible under the high ball without sacked fullback Israel Folau in their side.

"The obvious thing is his aerial skills; he’s one of the best in the world in the air," said Erasmus. "With him out of the Wallabies team there might be less contesting in the air for us to do."

Australia are seeking a first win on South African soil in eight years and a first victory at Ellis Park since 1963.

Coach Michael Cheika has left experienced scrumhalf Will Genia and utility back Kurtley Beale on the bench, but will hand a debut to Fijian-born number eight Isi Naisarani.

Tom Banks has been handed the fullback jersey ahead of Beale, and Nic White returns after a four-year absence in front of 100-cap Genia.

Cheika is looking forward to seeing his side run out at Ellis Park, which usually boasts the most hostile atmosphere among the South African grounds.

"We haven’t been to Ellis Park in 11 years. I’ve only coached one game there as Waratahs coach," he said.

"That’s what I enjoy, though, to be in the cauldron of the opposition. It’s motivating for us. What else could you ask for in terms of an intimidating atmosphere?

"It’s a good challenge and we must stand up. This is what rugby is about." 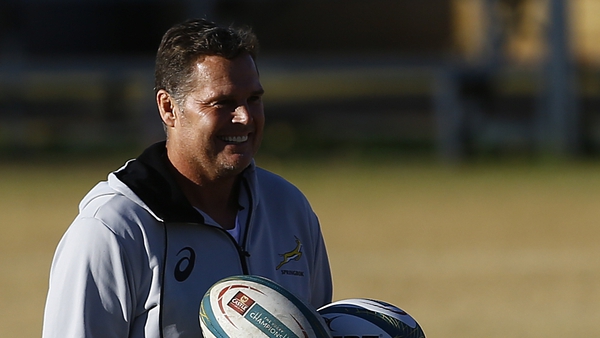