Warren Gatland has been confirmed as the Lions head coach for 2021 tour of South Africa.

Gatland will take charge for the third time having led the Lions to a series victory over Australia in 2013 and a drawn series against New Zealand in 2017.

He was also an assistant in 2009 when Ian McGeechan's Lions lost 2-1 in South Africa.

Gatland, who led Wales to the Six Nations title this year, will stand down as the country's coach after the Rugby World Cup in Japan, having won three Grand Slams during his spell as the longest-serving coach in their history, having taken over in 2007.

Previously he has taken a sabbatical from his Wales duties to dedicate himself to the Lions but now he would be free from any distractions from when the World Cup ends on 2 November.

Gatland said after the last Lions tour that he was frustrated by limited time given to prepare the team and by the shortened nature of the tour. He was also not happy at his treatment by some areas of the New Zealand media.

The Lions' last series victory against the Springboks came in 1997, also under McGeechan, when the host nation were world champions.

Gatland revealed he "couldn't turn his back" on the challenge and aims to complete some unfinished business in South Africa.

"I love the Lions as a concept," he said. 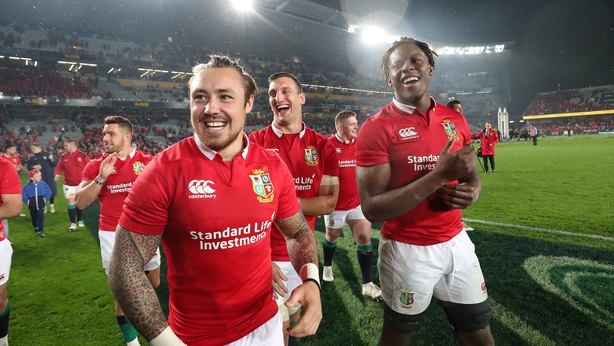 "There were parts of the New Zealand tour that were incredibly challenging. Any Lions tour is probably the hardest thing you will ever do as a coach in terms of preparation and scrutiny as a coach.

"But one thing of reflecting back was the hospitality we had and the atmosphere of the games was incredible.

"Being a part of the Lions is an opportunity to go to South Africa and finish some unfinished business. We spoke about the potential and I couldn't turn my back on the challenge."

The New Zealander admitted this will be his last tour as Lions head coach.

When asked if it would be his final one, he said: "I think so, yeah. I will have done a full round of tours.

"The challenge for me as a head coach is to go undefeated in Test series. That would be something pretty special if I could achieve that.

"I've been extremely privileged to have the honour of being involved with the Lions, this will be my fourth tour, and I'm so thankful to have been given the opportunity."

Gatland will also be involved in the planning of the trip.

He said: "I'm incredibly excited about this appointment and it will give me a great opportunity to be involved in the planning and scheduling of this tour.

"The planning and scheduling hasn't been finalised yet and negotiations are under way with how much time we'll have together before we go away as a group on the tour.

"It's a tough place to tour but I'm excited about the challenges."

Gatland had been touted as a replacement for Eddie Jones, whose England contract expires in 2021, but now looks likely to return to his native New Zealand after his 2021 Lions duties.

"I can categorically tell you now I will definitely not be coaching England," Gatland told TalkSport.

Now he has definitively ruled out coaching England, it paves the way for a future Super Rugby coaching role - and perhaps a long-term crack at leading the All Blacks.