Reigning champions Leinster made a successful defence of their Guinness PRO14 title as they battled to a 18-15 win over Glasgow at Celtic Park.

Leo Cullen's side faced a tough challenge from the Glasgow Warriors in their own city, with the vast majority of the record 47,128 crowd at Parkhead cheering on Dave Rennie's team.

With their trademark grinding and relentless manner, Leinster smothered their rivals into submission and claimed victory thanks to tries from Garry Ringrose and Cian Healy.

The tempo at the beginning was befitting of the occasion as both teams came out swinging.

Warriors were given a let off when Jack Conan dropped the ball just as Leinster looked set to carve their way in for the opening score.

Jonathan Sexton was not so fortunate as his miscued pass handed Glasgow the opening score 14 minutes in.

Tommy Seymour did brilliantly to steal possession before Adam Hastings found touch with his kick. 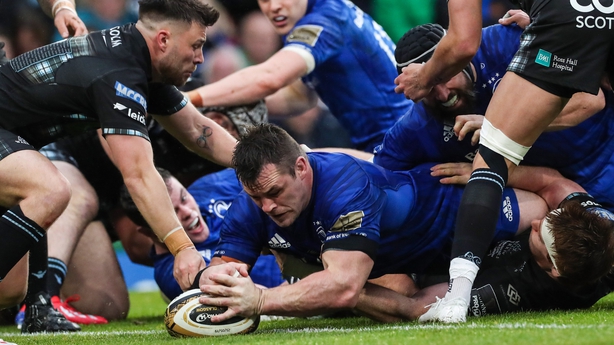 Leinster made a mess of the line-out and Glasgow patiently worked their way through the phases with Scott Cummins' brave drive puncturing a hole for Fagerson to dive through and score, before Adam Hastings converted.

But Warriors' celebrations were quickly cut short as - 60 seconds later - Luke McGrath charged down Hogg's kick inside his own in-goal area and Ireland centre Ringrose was first to the ball to dot down.

Sexton's conversion went astray, while Glasgow were left to be consoled with a Hastings penalty after DTH Van Der Merwe failed to make get across the line after Kyle Steyn's daring break.

There were worrying signs for Fraser Brown ahead of this year's World Cup as his ankle gave way under him as he went in for a collision. The Scotland hooker had to be carried off on a stretcher with Stewart taking over.

And there was more pain in store for Glasgow as the Blues put the squeeze on in vintage Leinster style.
Recycling the ball through ruck after ruck - 17 in total - they inched their way forward before Healy squeezed his way over. Sexton nailed the conversion and then a penalty to put his side ahead by five at the break.

Glasgow needed an injection of spark as the second half got under way but their task grew tougher when Steyn was yellow carded after resorting to illegal means to smother Ringrose's threat as Leinster broke away. 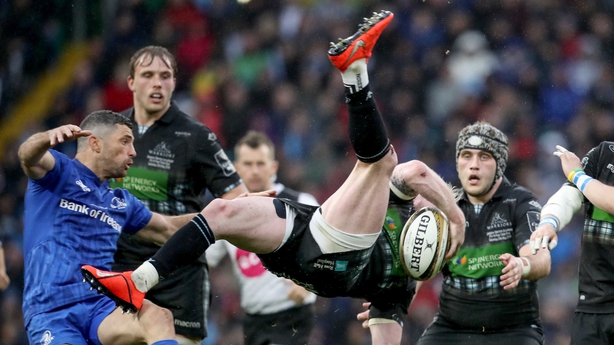 Sexton booted over another penalty to put daylight between the sides but Glasgow did well to limit their losses during the 10 minutes they were a man light despite having Leinster camped in their 22.

The Glasgow faithful had grown increasingly frustrated with referee Nigel Owens' decision making through the game and they did not hold back with the boos when the Welsh official opted only to flash yellow at Kearney after the Leinster full-back wiped out Hogg in the air.

To rub salt into Warriors' wounds, the ugly collision left Hogg dazed and he was forced off for a head injury assessment just when his side needed him most.

Glasgow got a lifeline, however, with five minutes left when Huw Jones span the ball wide for Stewart, who darted in to score.

But Hastings fluffed his conversion and Leinster were able to hold on for league title number six.