Ulster head coach Dan McFarland admitted to being disappointed that his side were unable to offer a fitting farewell to Rory Best and Darren Cave.

Both Best and Cave played their final game for the province as Glasgow Warriors claimed a one-sided 50-20 Guinness Pro 14 victory at Scotstoun.

The Warriors ran in seven tries to set-up a final at Celtic Park against either Leinster or Munster, and McFarland admitted that his side were second best in nearly every aspect against the Scottish outfit.

"Sometimes you come out and you play a team that’s playing much better than you," he told RTÉ Sport.

"I think we showed, we demonstrated that we have the capacity to do good stuff but at this level in a semi-final final you’ve got to build pressure consistently at really any stage in the game."

While the nature of the defeat was a chastening experience for McFarland and his squad, he revealed that the biggest blow was Ulster’s inability to give Best and Cave the kind of send-off that they deserve.

"There’s a lot of disappointment in the changing room because there is that sense that we really didn’t give Rory and Darren the send-off that they deserve, particularly in terms of our performance," he said.

"But that doesn’t take anything away from what they’ve given this club over so many years.

"Darren became the most capped Ulster player tonight with Andrew Trimble and that’s significant. Rory’s legacy is what it is and both of them, it can never be taken away. People can’t take it away from them or the history of Ulster Rugby. 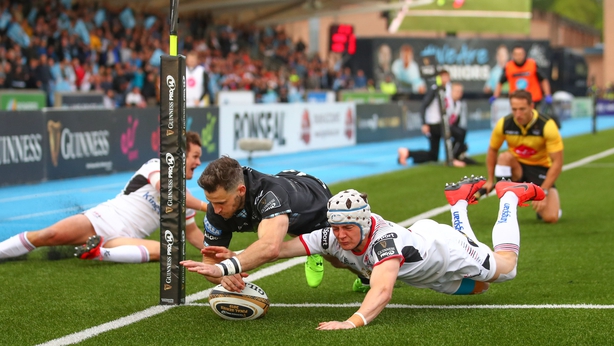 Meanwhile Glasgow coach Dave Rennie was unhappy with the way his side appeared to switch off in the final ten minutes.

Three late scores from Marcell Coetzee, Rob Herring and Mike Lowry added a touch of respectability to the scoreline, that was scarcely warranted and Rennie sees that as something for Glasgow to work on.

"We got off to a flyer as we often do, so we got a bit of scoreboard pressure on them early, and with a bit of breeze behind us we were able to play at the right end of the field and turn pressure into points.

"I thought for 70 minutes wee defended really well. The last 10 was not flash. It's funny because we were looking at the scoreboard and we've got 50 points on the board and we're angry because of the way we finished the game.

"But for a big chunk of the game, we were excellent - really clinical - turning defence into attack and scoring points from it.

"It's perfect prep for next week. If we had won 50-3 or something like that then that wouldn't be ideal preparation."