Saracens were crowned kings of Europe for a third time in four seasons after fighting back to beat Heineken Champions Cup holders Leinster 20-10 at St James' Park.

A brutal contest in front of a 52,000 crowd ended with Saracens becoming the most successful English club in European Cup history.

And they did it the hard way, wiping out a 10-point deficit through tries by wing Sean Maitland and number eight Billy Vunipola, plus two penalties and two conversions from Owen Farrell.

Prop Tadhg Furlong claimed a first-half touchdown for Leinster, while skipper Johnny Sexton added a conversion and penalty, but hopes of the Irishmen claiming a record fifth European title were dashed.

England prop Mako Vunipola returned to action for Saracens after recovering from an ankle injury, but the twice European champions were without flanker Michael Rhodes because of a back problem.

It meant Itoje wearing Saracens' number-six shirt, and Will Skelton partnering George Kruis in the second-row, while Leinster were unchanged following their semi-final victory over Toulouse last month.

Billy Vunipola, who was booed most times he touched the ball during his team's semi-final victory over Munster, again received jeers.

He was handed formal warnings from his club and the Rugby Football Union after he posted on social media that "man was made for woman to procreate that was the goal no?" and also liked a social media post from Australian player Israel Folau that stated "hell awaits" for homosexuals.

Saracens gave as good as they got during the opening quarter, but a promising attacking platform collapsed after skipper Brad Barritt was penalised for an illegal challenge at a ruck.

A poor clearance kick by Farrell then gave Leinster a chance to run from deep, and centre Garry Ringrose freed full-back Rob Kearney in space, but Saracens held out.

But they did so illegally, and Itoje was yellow-carded by referee Jerome Garces for a technical offence before Saracens replaced Mako Vunipola and his fellow prop Titi Lamositele with Richard Barrington and Vincent Koch.

And Leinster struck while Itoje was off as Furlong crashed over from close range after the Irish side opted for an attacking scrum rather than a penalty kick, and Sexton's conversion made it 10-0.

Farrell opened Saracens' account by landing a penalty just before the break, and then they hit Leinster by scoring a try on the stroke of half-time.

Patient build-up play by the forwards resulted in scrum-half Ben Spencer firing out a long pass to Farrell, who flicked the ball on and an unmarked Maitland finished off, with Farrell's conversion making it 10-10 at the break.

There was no let-up in the third quarter, with both sides going close, and Garces went to the television match official to rule on whether a Saracens player had scored by touching the ball against the post.

No try was given, but Garces sin-binned Leinster flanker Scott Fardy, and Farrell kicked the resulting penalty to nudge Saracens ahead for the first time.

Itoje was then lucky to avoid another card for a challenge on Leinster wing James Lowe - Garces was content to award only a penalty - as the Irish side launched another spell of concerted pressure.

But back came Saracens, with Billy Vunipola smashing through four defenders for a crucial try 13 minutes from time that put his team in dreamland and left Leinster reeling. 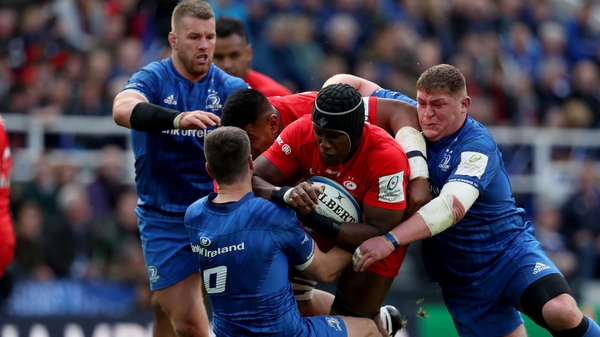