Heading into a home game with a Guinness Pro 14 semi-final at stake, Ulster should feel rightly confident of reaching the last four.

Last weekend’s one-point victory over Leinster, despite it being effectively a dead rubber, was a confidence booster as Connacht roll into Belfast on Saturday with hopes of repeating their title success of 2016.

Dan McFarland’s side have been impressive on their own turf, losing just one game in all competitions as Leinster, Munster, Racing 92, Leicester and Scarlets have all left defeated.

What won’t be lost on the home side however that the only side they have fallen to in 13 outings at Kingspan Stadium is Saturday’s visitors.

In October Andy Friend’s side profited from Matthew Rea’s red card early in the second half to record their first victory in Belfast since 1960.

Ultan Dillane was part of the Connacht team that night and told RTÉ Sport why teams, and particularly Connacht, have found it such a difficult place to go.

"They have a lot of pride in what they play for," he told RTÉ Sport. "It’s quite admirable, but we have to put that aside this weekend and hopefully bring the best out of ourselves."

How did they achieve the win earlier in the season? 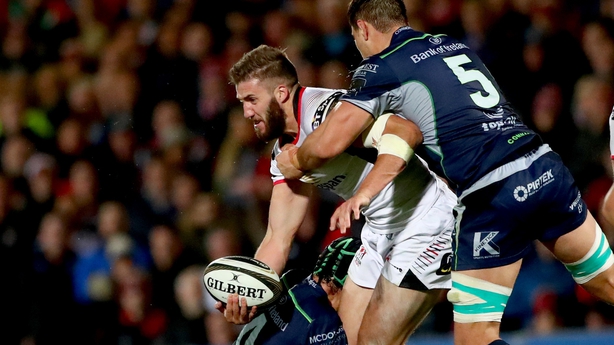 "We had the right mentality. There was a lot of leadership that week and it came through game day.

"We got a bit of luck as well with Ulster’s two disallowed tries. We have the same referee [Andrew Brace] this weekend."

The Ireland lock says he was unaware until this week that no other side had got the better of Ulster at Kingspan, but insists they are travelling full of confidence as they bid to make it three wins out of three against their interpro rivals.

"It’s a huge relief to be in the knockout stages. It’s been our goal this season to get this far and we’re hoping we have another three games."