Former Ulster player Paddy Wallace says there is huge optimism around the province as they eye a place in the Guinness Pro 14 semi-finals.

Dan McFarland’s side got the better of Leinster for the first time in two years with a 14-13 win at Kingspan Stadium, though the game was effectively a dead rubber with both sides already secure in the top two places in Conference B.

After encountering difficulties both on and off the pitch last season, Ulster welcome Connacht to Belfast next weekend with a place in the last four of the competition.

It comes off the back of the narrow Champions Cup quarter-final defeat to Leinster and Wallace told RTÉ Sport that the feel-good factor is palpable.

"How things have changed here is palatable," he said. "Ulster sold 17,000 tickets for the game [against Leinster].

"People are coming back to watch Ulster."

In McFarland’s first season at the helm, Wallace insists it is a collective effort in turning their fortunes around.

"You can see from December, the performances have really lifted. This was supposed to be a building block of a season to get us back on track, but we have exceeded expectations.

"Ulster are certainly trending in the right direction." 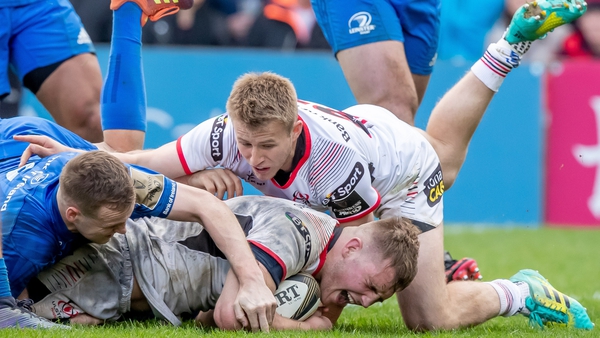