Munster overcame a sloppy start to defeat Connacht in Thomond Park but Glasgow's one-sided victory over Edinburgh in Scotstoun condemned Johann Van Graan's team to Leinster's side of the draw for the playoffs.

Playing a makeshift Connacht side, the hosts fell behind 23 minutes into the game following a Finlay Bealham try.

Andrew Conway was gifted an opportunity to restore Munster's advantage almost immediately afterwards, but the winger was excessively casual about applying the finish and a quick-thinking Stephen Fitzgerald raced back and succeeded in dislodging the ball from the former Leinster man's hands as he stooped to score.

A horrible moment for Conway.

Munster, however, would re-take the lead soon after, Tadhg Beirne taking a pass from Kleyn and crashing between Adeolokun and O'Halloran to score under the posts. 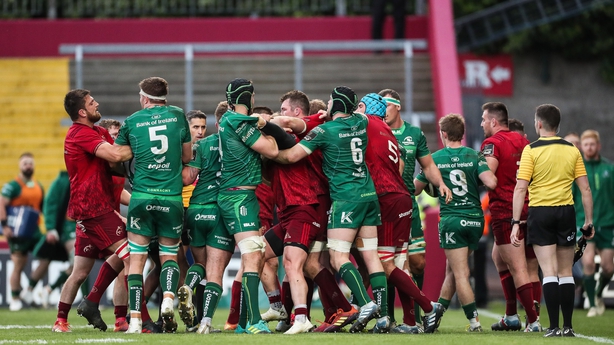 They would lead by 10 points at the interval, with Conway making amends to a degree by burning Copeland on the outside, tossing a pass out to O'Mahony on the right wing before the flanker flung the ball inside to Mike Haley who scampered over for the score.

With Glasgow by this stage cantering away to victory, it was clear that the Thomond Park game had morphed into a dead rubber but, despite the low stakes, the niggle increased markedly in the second period with brawls breaking out routinely.

Peter O'Mahony and Eoin McKeon fell into a scrapping match on the turf, which ended with the Connacht No. 6 having the shirt ripped from his back.

It was McKeon who would put visitors back in the hunt for a win here with 10 minutes remaining. Munster replacement prop Jeremy Loughman was sin binned for consistent infringements at the scrum and from the subsequent Connacht drive, McKeon barged over from close range after taking a popped pass from Caolin Blade. 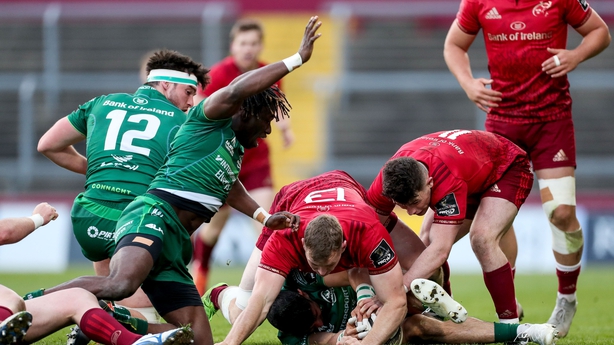 The westerners were within a converted try of the lead and boasting a numerical advantage but Munster would put the result beyond doubt with a closing surge.

21-year old outhalf Conor Dean - who showed encouraging flashes a flair on an occasionally uneven debut - tossed a rather ambitious offload seconds after referee Frank Murphy had indicated a Connacht advantage over and Munster launched an attack, at the end of which JJ Hanrahan, with numbers outside, threw a dummy and darted under the posts from close range.

A humdrum enough win for the hosts and the 34-10 win for Glasgow in Scotstoun means that Munster face Benetton Rugby in the quarter-final at Thomond Park, the prize of an away semi-final against Leinster awaiting the victor.