Vunipola defended and 'liked' an Instagram post published by Israel Folau midweek in which the Australia full-back made homophobic remarks.

He was booed throughout Saturday's game by Munster fans with one supporter confronting him on the pitch after the match.

McCall tried to draw a line under the whole affair and said he did not see the post-match incident, while a question on the matter to Munster boss Johann Van Graan at his press conference was blocked by one of the province's media team.

McCall said: "Billy was outstanding today, and so were all of his team-mates, to be honest.

"As a group, we were determined not to let this week pass us by because we work incredibly hard to be involved in weeks like this one, games like this one.

"And we ended up having a brilliant week, and you can see that in the performance today. You could see how tight we were.

"I thought we played really well. Although the scoreboard said 12-9 at half-time, it didn't feel like that.

"The thing that pleased me most was that the players understood that the scoreboard did not necessarily reflect how well we had played and what we were building towards.

"I was just really pleased with our intensity, which was relentless the whole game, and the control we had emotionally as well." 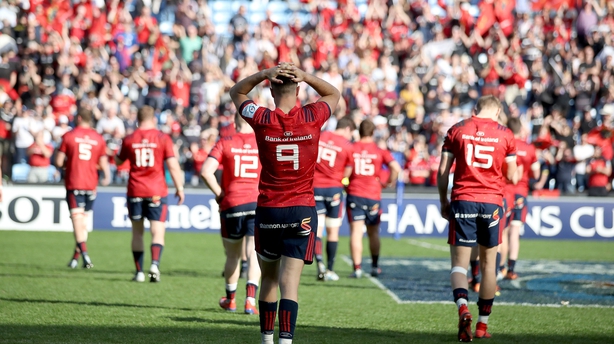 A final against Leinster or Toulouse awaits for Saracens in Newcastle next month as the English outfit target a third Champions Cup title in four seasons.

Out-half Owen Farrell was the architect of victory, kicking 22 points, while Vunipola and flanker Michael Rhodes touched down.