Chris Farrell admits Munster's inability to progress beyond the semi-finals has become a concern that will influence their approach to Saturday's Heineken Champions Cup clash with Saracens.

The rivals meet at Coventry's Ricoh Arena in a repeat of the 2017 semi-final in Dublin that saw Mark McCall's men run out emphatic 26-10 winners en route to claiming a second successive Champions Cup title.

Munster have failed to progress beyond the last four since 2008 - the year they lifted the second of their two European crowns - and Farrell insists that only by carrying the fight to Saracens can they make a critical breakthrough.

"We've got to get past the semi-final stage because this is our third in a row now," the Belfast-born back, who is named at second centre, said.

"It's a 14th semi-final, which is a record, but we've got to get past this point. It can't be a sticking point all the time

"We can't have the same mindset as in previous years, we've got to do something different and implement things that haven't worked in the past.

"Saracens have been one of the biggest forces in Europe over the last few seasons. They're always there or thereabouts, but we gave them too much respect two years ago.

"We're not going to sit back the way we did in 2017 and let them enforce their game in the second half, which is what they did that time.

"Eventually we cracked and we didn't really look like we could trouble them. They were a better side that day, but we're different now and we've added a lot to our team.

"We've got some real quality now - Tadhg Beirne is a big, big asset to us and Peter O'Mahony is playing rugby like he's never played before. This time we're better."

Here is your Munster team for tomorrow's Champions Cup semi-final against Saracens! 💪 #SARvMUN

We'll be arriving at the Ricoh Arena tomorrow at around 1.30pm if supporters would like to welcome our squad to the stadium!

Farrell believes the contest will be decided by a combination of technique and desire, with Munster determined to make an early statement.

"Saracens are the number one team in Europe coming into this game and will be expecting to win, so we have to show we won't make it easy for them. We want to put them under pressure early," Farrell said.

"They are a really physical team and we can expect it to be a real battle. The breakdown and in the contact area will be huge for us in terms of trying to knock their momentum.

"They're a team who when they get momentum are really dangerous off the back of it. When you stop them at source, get your body height right and get the collisions correct, you have a chance.

"They rely massively on their set piece and the contact area, so being physical will be crucial.

"We always say that we start from zero and this is a new game, regardless of what happened in the quarter-final. This is our chance to start from zero."

Meanwhile, three weeks after fearing his season was over Brad Barritt will captain Saracens.

The 32-year-old centre turned his ankle and hobbled out of Saracens' 56-27 quarter-final thrashing of Glasgow on March 30, in pain and in a panic about his injury.

Fast forward 21 days though, and Barritt has somehow recovered from that nasty ligament problem to lead Sarries.

Asked whether he thought his season was over when struggling to leave the field against Glasgow, Barritt said: "Yes, in terms of pain, I had a pretty good inclination; I thought it was quite serious. 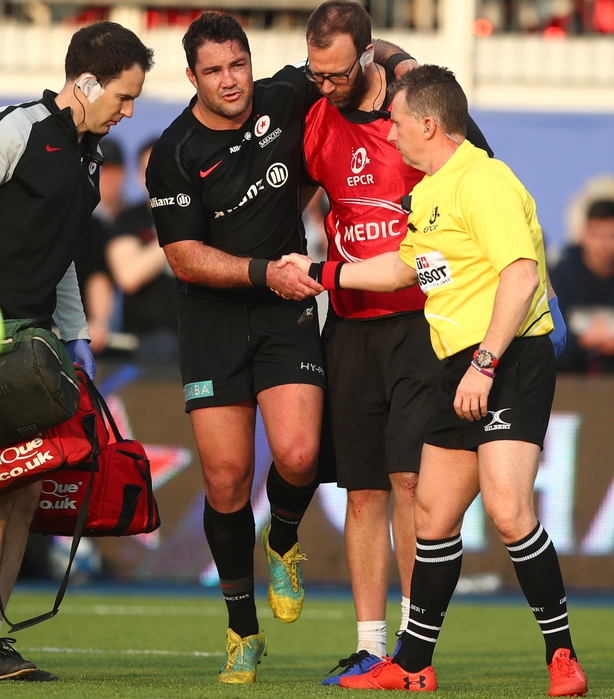 "But we have put a lot of time and effort into trying to turn it around.

"It is probably credit to (physio) Richard Bamford who has been looking after me every day for the last three weeks.

"If this game was a week later you probably would have only pushed for four weeks.

"But the nature of this game was three weeks and we wanted to give every chance to try to make it happen.

"So I'm just thankful it wasn't something that ruled me out for the rest of the season."

Barritt has developed a fearsome reputation as one of rugby's toughest competitors time and time again through both his brutal defensive physicality and his ability to break defences in attack.

But the former England centre is perhaps most renowned for putting his body on the line for Saracens' greater good.

This latest rapid recovery only further underscores his remarkable healing powers, with his presence a big boon for Mark McCall's side.

Barritt, however, insisted that every top player will be managing at least one niggle at this stage of another gruelling campaign.

"I wouldn't even know where to start!" joked Barritt, chuckling at his lengthy injury history.

"But now, I am not too dissimilar from a lot of people. With rugby, you are always managing one thing or another.

"Even the guys who are 100 per cent fit, there is still some component of their body they are rehabbing or looking after at that point.

"It is not too dissimilar from seven or eight players downstairs who are managing things at the same time."