Andy Friend has made two changes to his team for Connacht's crucial Pro14 clash with Cardiff Blues tomorrow (kick-off 3pm).

Ireland centre Bundee Aki replaces Peter Robb while flanker Paul Boyle comes in for Eoin McKeon as Connacht target a win that would send them through to the play-offs and guarantee a place in next season's Champions Cup.

International lock Quin Roux misses out after suffering from a virus.

Connacht are currently third in Conference A and victory over fourth-placed Cardiff at a sold out Sportsground would be good enough to cement that position with one round of games remaining.

Aki will form a midfield partnership with Tom Farrell, who was withdrawn early as a precaution in the narrow win over Zebre but is fit and available.

There is a familiar look to the back three with Tiernan O’Halloran named at full back while Darragh Leader and Matt Healy are selected on the wings. 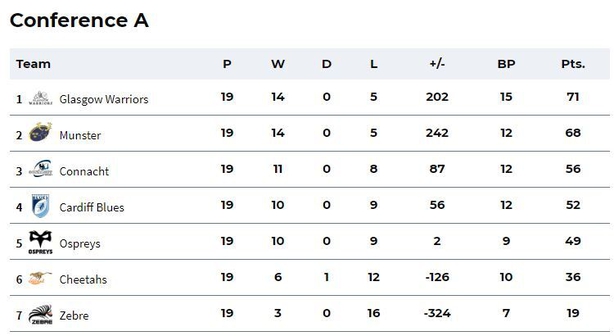 Paul Boyle’s selection at blindside sees him come into a back-row with openside Colby Fainga’a and Captain Jarrad Butler at number 8.

The front five is unchanged as props Denis Buckley and Dominic Robertson McCoy line up in the front row alongside hooker Dave Heffernan. In the second row, Ultan Dillane and Gavin Thornbury continue their partnership.

Head coach Andy Friend says he is well aware of what is stake against their Welsh conference rivals.

"The stakes are really high but our destiny remains in our own hands," he says. "If we perform on Saturday and can win the game we can secure that play-off on Saturday night and ensure a Champions Cup spot, which would be brilliant.

"We know what we need to do to get a result. We must make sure we are nice and direct, that we control the football when we have it, and when we don’t, we get don’t give them easy yardage."