With two rounds of the regular Guinness Pro14 season remaining we look at the permutations for the four provinces.

Champions Leinster got the heavy lifting done early when they claimed top spot in their conference in March.

Munster are also through to the play-offs, but will hope to improve their seeding, while Ulster and Connacht are in favorable positions to get to the post-season.

The holders have been guaranteed a home semi-final since beating the Cheetahs last month.

That result put them in an unassailable position at the top of Conference B, enabling Leo Cullen and his staff of focus on priming his side for the Champions Cup.

Since securing their progress they’ve lost away to Edinburgh and drawn at home with Treviso, those games sandwiched between a Heineken Cup win over Ulster.

The remaining games against Glasgow at the RDS on Saturday and away to Ulster on 27 April will be of much more import to their opponents and, as it happens, Munster. 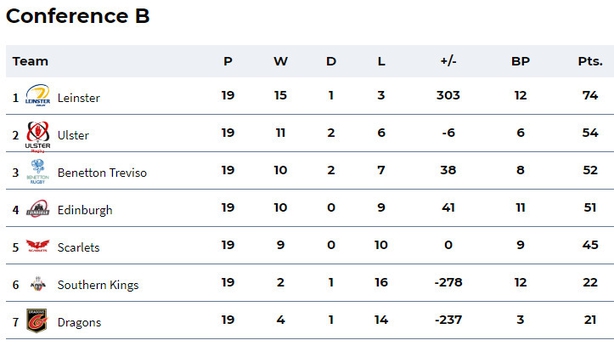 Dan McFarland’s side are second in Conference B and know a win against Edinburgh on Friday night would secure a home quarter-final, putting them clear of Benetton in third place.

Should they suffer a defeat in Murrayfield they would still have their play-off destiny in their own hands.

A win over Munster at the end of the month would be enough to progress, possibly with a home quarter-final, depending on how rivals Benetton (away to Zebre) and Edinburgh (away to Glasgow) fare.

The 2011 winners are already in the play-offs, but are depending on other results to go their way in order to secure a home semi-final.

The Italians are third in Conference B and with Munster keeping at least one eye on their Champions Cup semi-final against Saracens, then the visitors will be forgiven for not pushing out the boat in Treviso.

"You only get one shot at a [European] semi-final," said Van Graan on Monday.

That Glasgow can secure pole position with a win over already-qualified Leinster, who are likely to field a second string, may also feed into their thoughts.

Given Munster are clear of Connacht in third, with a home quarter-final  secured, they may just have to settle for what they’ve got.

Edinburgh, also in the mix in Conference B, may even do Munster a favour when they visit Glasgow on the final day, hoping to bag a play-off place for themselves. 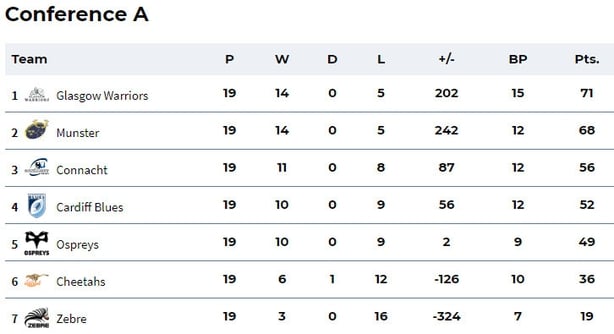 This Saturday’s game against Cardiff at the Sportsground could be season-defining for Andy Friend’s side, who didn’t field their first-choice XV in the Challenge Cup against Sale two weeks ago.

That was a signal that they felt their best shot at Champions Cup qualification would come via the Pro14.

A narrow win over Zebre last weekend leaves them four points clear of this weekend’s opponents meaning that victory would secure a play-off berth.

A defeat would mean they would have to win or draw in Thomond Park on the last day and hope out-of-contention Ospreys spring a surprise in Cardiff.