The winger bagged a brilliantly-executed second score with nine minutes left  to turn the game on its head after Edinburgh had fought back from 7-0 down to lead for much of the game thanks to Chris Dean's try and Jaco Van Der Walt's kicking.

The visitors were making a record 18th appearance in the last eight and they used all their experience to kill the game and ensure there was no late scare.

The English champions were forced to reshuffle their back-line after England captain Owen Farrell was ruled out because his wife had gone into labour.

Saracens, European champions in 2016 and 2017, were the only team to win all six pool matches this season, including two against Glasgow. They beat Munster in the European Cup semi-final two years ago.

For Munster though, it was all about taking care of business in Scotland before they could consider the prospect of a revenge mission.

Edinburgh are relative novices in the latter stages of the tournament but they had won 17 of their last 19 home games in Europe, and 11 out of 12 in total at home this season, and attracted a 36,358 crowd at BT Murrayfield, although many were wearing the red colours of Munster. 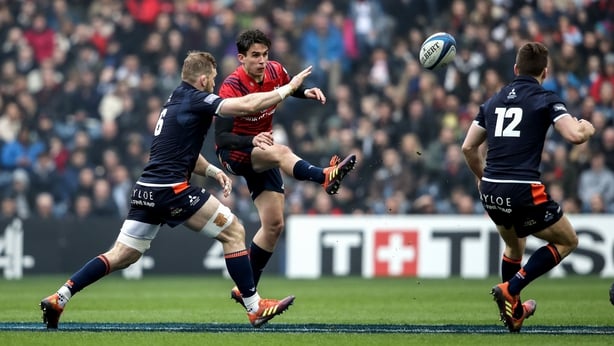 Edinburgh started on the front foot and opted to kick two penalties inside the 22-metre line into touch but Munster defended without major concern.

The hosts went the same route after Tadhg Beirne was yellow-carded in the 12th minute for killing the ball on the ground after inventive play from John Barclay had left the visitors exposed.

Munster emerged unscathed following some desperate defending on their line with a penalty award relieving the pressure, and they were soon on the attack. 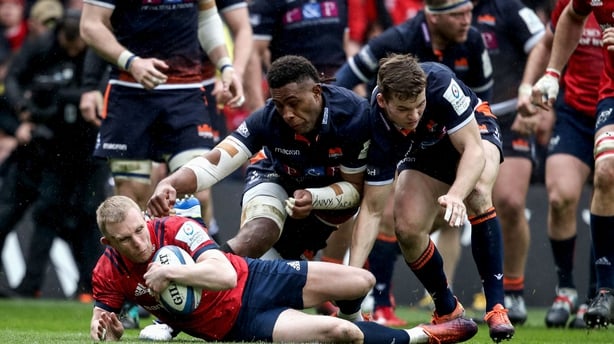 They got the breakthrough after Edinburgh scrum-half Henry Pyrgos deliberately knocked on as the ball emerged from a five-metre scrum. Earls took a quick one and darted over himself.

Edinburgh complained that Conor Murray had slammed Pyrgos to the ground just before Earls exploited the gap but referee Pascal Gauzere refused to take another look. Joey Carbery converted.

The numbers were evened up before some patient possession and quick ball inside the Munster 22 paid off as Dean went over. Van Der Walt levelled the scores before kicking a penalty. 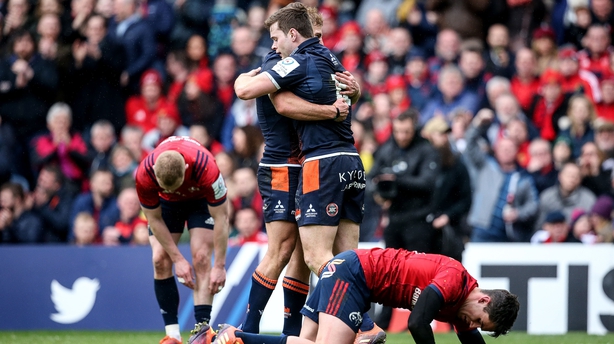 Munster lost Carbery, the top points scorer in the pool stages, to injury and Edinburgh defended a series of high kicks to go into the break 10-7 ahead.

Carbery's replacement, Tyler Bleyendaal, and Van Der Walt quickly traded penalties before Munster enjoyed a strong period. But Darren Sweetnam was stopped just before the line and Edinburgh's pack won a penalty to relieve the pressure.

The hosts went back on the attack. Darcy Graham and Damien Hoyland were bundled into touch on either wing as Edinburgh stretched the Irishmen.

The match turned on an infringement off the ball when Pierre Schoeman was ruled to have barged Beirne near the halfway line with his team in possession.

After treatment for Beirne, Munster kicked the penalty into touch and soon produced by far their best series of passing of the game to send Earls diving over in the corner.

Bleyendaal kicked brilliantly to extend the gap to four points and leave Edinburgh needing a try. But they could barely get past the Munster 40-metre line.