Leinster go into Saturday’s Heineken Champions Cup quarter-final as heavy favourites, but the players and management are wary of Ulster’s insider knowledge.

The current champions could face four of their old team-mates in the Aviva Stadium in John Cooney, Ian Nagle, Marty Moore and Jordi Murphy, a standout of last season’s double success.

Murphy’s transfer to Ulster was announced in December 2017 with the back rower determined to get more regular game time in order to force his way into Joe Schmidt’s Ireland team.

The 27-year-old subsequently starred in Ireland’s Grand Slam campaign and was a regular starter for Leo Cullen’s side as they won their fourth European Cup last May.

Last season’s semi-final between Racing 92 and Munster was a perfect example of the damage a former colleague can do as Donnacha Ryan’s knowledge of his old team’s plays and tactics played a major part nullifying the 2006 and 2008 winners’ lineout.

"Jordi will have an in-depth knowledge of the structures that we play," Leinster number 8 Jack Conan told reporters.

"He’ll know how to go about stopping us as well so we can’t give him easy access into the game. We know how hard he works and how disruptive he can be in those breakdowns.

"If he plays at 7 he goes extremely hard at the ball and [at possible] turnovers that he can win. So it’s about not giving him easy access in the game, and not letting Ulster build the game they want to play.

"It’s definitely an added distraction and something we’ll have to sort out early in the game."

It’s a viewpoint that is shared by Cullen, who referred to his former player in the present tense when addressing the issue. 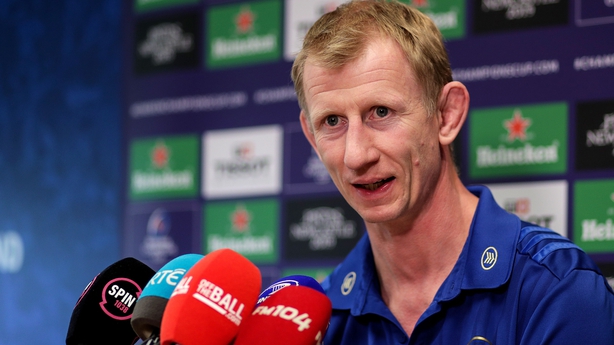 "I’m trying to remember what Jordi will remember, amongst other players," said Cullen as he gave an injury update, which included the news that Josh van der Flier will probably miss the rest of the season.

"Jordi is such an integral part of what the team here achieved last year. You see he was brought up to lift the trophy at the end, so yeah, he’ll be highly motivated, I’m sure, playing in the game.

"That’s first and foremost, you have to respect the motivations of all our opponents. What does he remember and how do we go about tweaking a few little things in our game based on what we think he might know?"

While Murphy, who played 95 times for the province, is the most recent addition to Dan McFarland's side, Leinster may also come up against prop Moore, who joined Ulster from Wasps in 2018.

The 10-cap Ireland international played  58 times for Leinster between 2012 and 2016, while scrum-half Cooney spent four years at Leinster before switching to Connacht.

He came on as a replacement when Leinster beat Ulster in the 2012 Heineken Cup final at Twickenham.

Ex-Munster lock Nagle is on loan from Leinster having joined from London Irish in 2016.

Cullen signed a contract extension with the province two weeks ago and is the only man to have won the European Cup as a player and a manager.

Speaking about the two-year deal, he said: "I’m delighted and honoured really to be asked to stay on first and foremost.

"It’s not something I ever take for granted. I’m sure there are lots of people who would love to do this job.

"For me, I do feel very privileged that I’m in the position that I’m in. The club have shown quite a lot of faith in me which I will always be appreciative of."