Trailing 10-5 early on in the second half, Tony Smeeth's Trinity side turned on the style in ruthless fashion to claim Con's scalp and strengthen their grip on fourth spot, moving six points ahead of Garryowen with just two rounds remaining in the regular season.

Two of the Ireland Under-20s' Grand Slam winners, Rob Russell and Ryan Baird, started for the students who largely controlled possession inside the Con half. Micheal O'Kennedy was off target with an early penalty, and just when it looked like the visitors would strike from a lineout, Trinity scrum half Rowan Osborne executed a brilliant turnover, broke forward and released Ronan Quinn for a slick finish on the left wing.

Despite another maul effort failing to produce a score, Aidan Moynihan narrowed the gap with a routine penalty for a 5-3 scoreline. The two-point gap remained in place as number 8 Niall O'Riordan was just short of the Con line following a lung-busting run from deep, while James Hickey and captain Colm Hogan were particularly prominent in the Trinity attack on the resumption.

Nonetheless, with 48 minutes on the clock, Con winger Billy Crowley's powerful surge gave the visitors a foothold and when play was transferred across to the left, centre Alex McHenry sidestepped his way over the whitewash for their only try. Moynihan converted for a 10-5 lead but Smeeth's charges were soon running riot at the other end. Russell jinked over for their second try, having raced onto a Hogan pass.

O'Kennedy converted and had the tee again just shy of the hour mark, converting Osborne's clinical score from a Dan Sheehan offload and a strong initial carry by Max Kearney. Moynihan responded with a penalty, only for flanker Kearney's exceptional build-up play to give Trinity further momentum and he set up prop Giuseppe Coyne for a 65th-minute converted try.

Cork Con, who remain on course for a home semi-final, missed the influence of skipper Niall Kenneally and fell further behind after yellow cards for forwards Ross O'Neill and Dylan Murphy. O'Kennedy knocked over a penalty and Quinn completed his brace before either of the sin-binned players returned. Replacement James Fennelly rounded off a memorable day for Smeeth's young guns with a closing penalty.

Former Leinster winger Sam Coghlan Murray scored a try in each half as Terenure College edged out Shannon in a tense basement battle on Thomond Park's back pitch.

Division 1A's bottom two teams went head-to-head in today's early kick-off and it was Terenure who prevailed, closing the gap on second-from-bottom Shannon to a single point with Young Munster just a further point ahead. 'Nure still have work to do but a fourth win in six games has them heading in the right direction as the relegation dog-fight intensifies.

Playing towards the Ennis Road end, James Blaney's men took the lead with a well-struck sixth-minute penalty from out-half James Thornton. Things began to unravel for Shannon with a yellow card for taking out a player without the ball, and with 'Nure sucking the defence in, they spun the ball wide for Coghlan Murray to cross and Thornton nailed his second kick of the day for 10-0.

Winning a penalty from the game's first scrum gave Shannon a timely lift, and they kept the pressure on with 'Nure kicking straight into touch and coughing up a penalty at the lineout. The home crowd sensed a score and it arrived on the half hour mark when second row Ronan Coffey barged over from close range. Ben Daly tagged on a terrific touchline conversion, leaving it delicately poised at the break - 10-7.

The momentum continued to swing back and forth on the restart, Daly missing an initial penalty attempt before Coghlan Murray's pace out wide delivered a second try for the Dubliners just four minutes in. This time it was unconverted but eight points was a significant lead in such a tight contest, and Thornton followed up with a successful 53rd-minute penalty.

Knock-ons spoiled some promising play from both sides, particularly Shannon who lost control of possession close to the try-line and they were also held up from a 77th-minute lineout drive.

Their scrum half Aran Hehir was a real ball of energy and he drew a penalty and deservedly touched down from the subsequent lineout. The late losing bonus point could yet prove vital for Tom Hayes' young side who visit Young Munster for a massive derby clash in two weeks' time.

Garryowen's play-off hopes took a serious dent as in-form Clontarf maintained their push for a home semi-final with a bonus point win at Dooradoyle.

Second-placed 'Tarf scored two tries in each half to stay a point clear of defending champions Lansdowne, while the Light Blues, who have lost three of their last four matches, are now six points outside of the top four following Dublin University's surprise win at home to table toppers Cork Constitution.

Enforced changes to their pack did not help Garryowen's cause and the visitors gradually converted their pressure into points. Early on in the second quarter, former Munster scrum half Angus Lloyd opened the scoring with a well-taken try after being played in by Matt D'Arcy.

David Joyce converted and also added the extras to prop Vakh Abdaladze's 31st-minute score which saw him take advantage of a couple of missed tackles.

The Limerick men, who lost winger Tommy O'Hora to a first half yellow card, turned around at the interval with a 14-point deficit to overcome.

Their task grew even more difficult thanks to Joyce's 45th-minute penalty and an intercept try from well-positioned winger Cian O'Donoghue who broke clear from his own 22 to put 24 points between the sides.

The hosts responded on the hour mark, their forwards and former Ireland Under-20 centre David McCarthy crashing up close to the posts before quick ruck ball was spread to the left where out-half Jamie Gavin finished off a much-needed seven-pointer.

The deficit was halved to 24-12 with a quarter of an hour remaining, as Jack Daly and McCarthy were heavily involved again and possession was worked wide for winger O'Hora to score.

Just as Garryowen's bench was beginning to make an impact, one of Clontarf's reserves, Leinster sub-Academy teenager Conor Kelly, swept over for the bonus point-clinching try as the north Dubliners slammed the door shut on the home side's comeback bid. The defeat leaves Garryowen needing to win at Lansdowne in the penultimate round in order to stay in contention for the semi-finals.

The headquarters club bounced back from their lopsided defeat to Cork Constitution two weeks ago, with Sullivan taking his Division 1A top-scoring try haul to 12 tries after 16 rounds. He is on an outstanding run of form since the turn of the year, scoring 10 tries in seven league matches for Mike Ruddock's men. 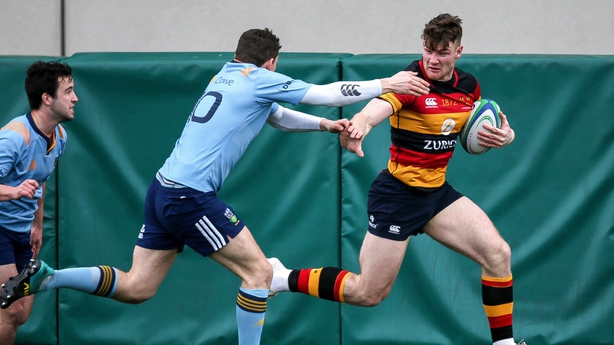 With the twin threats of Sullivan and Daniel McEvoy out wide, Lansdowne established a 24-12 half-time lead and hardly looked back. McEvoy matched Sullivan's double to take his own season's haul to nine tries, but a 51st-minute try from full-back Conall Doherty had UCD very much in the hunt at just five points down.

The students' discipline let them down at a crucial stage, as back-to-back yellow cards invited Lansdowne to flood forward again and they took full advantage.

A maul try from Leinster hooker Ronan Kelleher kicked off a profitable spell as the margin was widened to 45-19. While Willie Fay and Harry Brennan also got in on the act, the defending champions will have been disappointed to concede five tries on the back of their heavy loss at Con.

Sixth-placed UCD kept plugging away, mindful of the fact that the bottom two are not that far away. A brilliant breakaway score from out-half Matthew Gilsenan was the highlight of their efforts during the final quarter as they deservedly took home a try bonus point.

It keeps them five points clear of second-from-bottom Shannon, while the top four - including their next opponents Dublin University whom the face in the Colours match on 4 April 4 are now out of reach.

Rob Hedderman ran in a priceless late try in UCC's hard-fought victory over Young Munster in front of a large Mardyke crowd, climbing above the Cookies into seventh place in the process.

Both of these Munster clubs are scrapping to avoid relegation, with only four points now separating Division 1A's bottom four sides.

The try deadlock was finally broken by a smashing score from Munsters centre Luke Fitzgerald with 10 minutes to go, but full-back Hedderman replied just five minutes later as Brian Walsh's side edged a titanic tussle.

Defences were on top for most of the first half, the home support delighted to have Munster Academy talent Jack O'Sullivan making his first start at number 8 since his cruciate knee ligament injury last May.

Munsters hit the front thanks to a 13th minute penalty from out-half Shane Airey who has caught the eye with some cracking cross-field kicks in recent rounds.

Airey was down receiving treatment for the Cookies' second penalty attempt, which full-back Alan Tynan pulled wide in the 27th minute. Trailing 3-0 at half-time, UCC were kept scoreless until the 48th minute when Munster Academy prop Keynan Knox was sin-binned for a scrum penalty and James Taylor's trusty right boot brought the Cork students level.

Munsters were aggrieved with another penalty awarded against them for no clear release, straight in front of the posts. Taylor's 56th-minute strike stood as the lead score until Fitzgerald showed a clean pair of heels to the home defence to move Gearoid Prendergast's men back in front.

Airey converted to open up a four-point lead, yet UCC failed to panic and it was Hedderman who emerged as their match winner, coming up into the line to turn a pacy attack into seven vital points.