Andy Friend admits his Connacht team needs to beat Benetton at the Sportsground this Friday to keep their Pro14 play-off fate in their own hands.

The Westerners are third in the Conference A table with four games to play, 11 points behind Munster and only ahead of Cardiff on scoring difference.

"It's massive," the head coach told RTÉ Sport of this weekend's clash. "We're at that stage of the season where every point is vital for us.

Spoke with @andyfriend2011 earlier. Big game for @connachtrugby on Friday at the Sportground. Five of the internationals call ups available for selection. More on @RTEsport on 6.1 News pic.twitter.com/kOlttmlDNt

"They're in a similar situation. They're sitting second in their conference, we're equal third in ours so both teams will be looking for a win.

"We said at the start of the year we wanted to be there at the business end and we're there or thereabouts.

"But we need to keep winning to make sure we control out destiny. If we keep wining we stay in control. If we don't, then we have to start looking at points and seeing where we can scrounge some. At this stage it's just about the win." 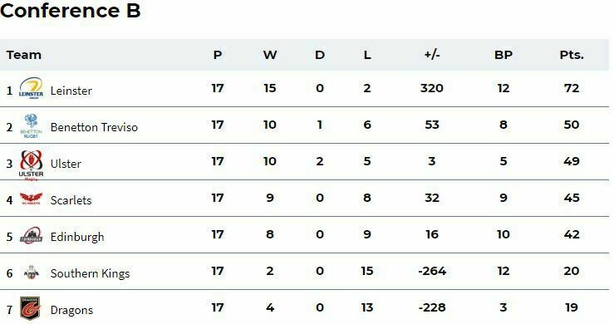 Their Treviso-based opponents have gone from fifth-placed finishers last year to being firmly in contention for a quarter-final spot, and provide the bulk of Italy's international squad.

"They've been great all year," said Friend. "From the front end of the year, what a quality side they've been and they've grown since then.

"I'm not surprised they're sitting in second spot. They're playing a physical yet attractive brand of rugby. Very disciplined, which is probably different to some of the Benetton teams we've seen in the past.

"They've got a lot of quality players. They're good and they're going to be tough."

Connacht will be without Ireland internationals Bundee Aki and Quinn Roux, who are both being rested, on Friday but will have Caolin Blade, Jack Carty, Tom Farrell, Kieran Marmion and Ultan Dillane back in the frame.