Wales leapfrogged Ireland into fourth in the final standings of the 2019 Women’s Six Nations table after securing a 24-5 bonus point victory over Adam Griggs’ side in Cardiff.

While the visitors drew first blood with a Beibhinn Parsons try, that was as good as it got from an Irish perspective in a game characterised by unforced errors from the visitors.

Despite losing number eight Siwan Lillicrap for 10 minutes in the first half for a high tackle on her opposite number Claire McLaughlin, it was Wales who picked off tries before the interval.

Just two minutes after the Irish score, Rowland Phillips’s side restored parity in some style.

Centre Lleucu George slung the ball out to winger Jess Kavanagh and she showed a clean pair of heels to evade full-back Lauren Delany and race in from distance.

While Lillicrap was in the bin, Wales extended their lead as Ireland courtesy of dominance in the scrum and close exchanges.

Welsh captain Carys Phillips, on her 49th outing for Wales, powered over at the back of the rolling maul, while Ireland’s attacks were foiled through a combination of patient defence and unforced errors as they trailed 12-5 at the break. 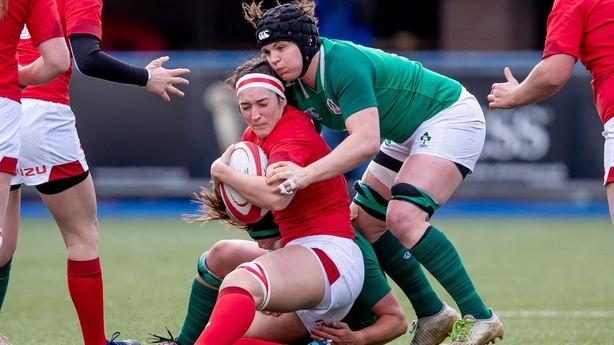 Playing into a stiff breeze, Griggs’ side were able to string out a number of attacks, but time and time again their accuracy let them down. The scrum continued to be decimated and it was little surprise when the home side tacked on further scores.

In the 69th minute, Welsh punished an Irish knock-on when flanker Beth Lewis finished off a move by crashing over from close range.

With the clock running down and Ireland desperately seeking a consolation score, Wales turned the ball over by ripping possession from prop Lindsay Peat in the tackle.

The ball was quickly recycled and spread wide and Parsons simply couldn’t catch winger Jasmine Joyce who raced into the corner to seal the bonus point win.