Eddie Jones has revealed he brought off Owen Farrell at a critical phase of Saturday's remarkable 38-38 draw with Scotland at Twickenham due to England's captain losing his "edge".

Farrell was replaced by George Ford in the 71st minute with the climatic match of the 2019 Guinness Six Nations tied at 31-31 after the Scots had produced five unanswered tries to threaten the greatest comeback victory in Test history.

The Saracens fly-half had gifted two of those tries - to Stuart McInally and Finn Russell - and was also lucky to escape a card for a late shoulder-led tackle on Darcy Graham.

Confessing his role in Scotland's resurgence, Farrell admitted "we probably gifted them the momentum swing, me more than anyone" and it was Ford who crossed for the converted added-time try that spared England from humiliation.

"Owen lost a bit of his edge. He was just a little bit off his best and George Ford has been in exceptional form this week," Jones told BBC Radio 5 Live's Sportsweek programme.

"We know George is an excellent player who can bring something different to the table. We ended up getting a draw due to George's brilliant play.

"The only thing I was pleased about in the second half was the response of our finishers, who got us out of a deep hole. They got us a draw in difficult circumstances in the end."

Overall England produced the best rugby of the Six Nations and dominated the try-scoring charts by touching down 24 times, 10 more than their closest rivals Ireland and Scotland, yet it was Wales who were crowned worthy champions.

Collapses in the second half in Cardiff and against Scotland at Twickenham point to a mental fragility that must be remedied in time for the World Cup and Jones is ready to enlist outside help to find a solution.

"The All Blacks had this problem for eight years and it cost them two World Cups. It's not an easy problem to fix. We've had four years, we're getting there," Jones said.

"We know what the issue is and we know how to fix it. We've got a very concrete plan in mind to fix it.

"It's just about getting the right personnel and staff in who can engage the players in conversation and allow them to be honest in how they think under pressure.

"If you look at the Six Nations in its entirety, tries for and against, we sit fairly well. We had a poor 30 against Wales and a poor 40 against Scotland."

Wing Jack Nowell admitted seeing Scotland retain the Calcutta Cup felt more like a defeat than a draw and lock George Kruis used complacency to explain how a 31-0 lead was surrendered.

"It was disappointing. It was a proper tale of two halves. We got shocked and just didn't deal with that properly," Kruis said.

"In the first half it probably came a bit too easily and then off the back of that we probably weren't humble enough to realise where we were at. 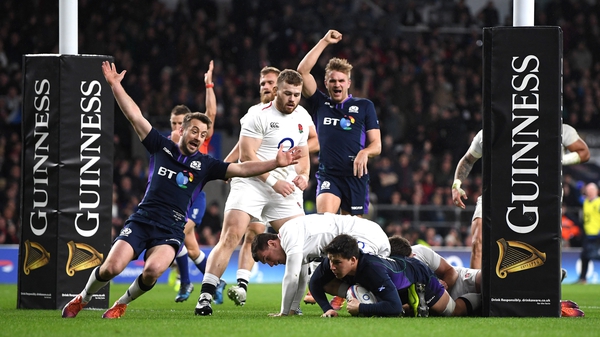