Joe Schmidt is expecting Sean O'Brien to produce a massive performance for Ireland in Saturday's slam-buster against Wales.

The 2011 European Player of the Year missed most of last year's action with a series of injuries.

His international comeback lasted just 37 minutes of the November game with Argentina before breaking his arm.

This year, the 32-year-old featured against England and Scotland but was off form in the win over Italy.

"To say that was not his best performance, I know he'd agree with that," said Schmidt at the team announcement.

The outing in Rome was deemed poor enough to see him drop out of the panel for the France game but an injury to Josh van der Flier (groin) has opened the door for London Irish-bound O'Brien, and Schmidt expects the Carlow man to charge through it.

"We do believe that Sean fits the bill. We're expecting him to put his best foot forward," the New Zealander said in what sounded like both a call to arms and a warning to the Leinster back row.

"I think we saw evidence when he came off the bench against England, first carry, he looked formidable in the carry.

"We hadn't won too many collisions in that game, earlier in the game and I think he did a really good job.

"I think he got on the ball a couple of times against Scotland, was unlucky not to get rewarded for it.

"Italy was a bit of a malaise for the whole team.

"For the French Test we had already made some decisions about who was going to be involved there.

"He's very very motivated to get back to that blockbusting best that has seen him as one of the players who has been incredibly influential in games that he's played." 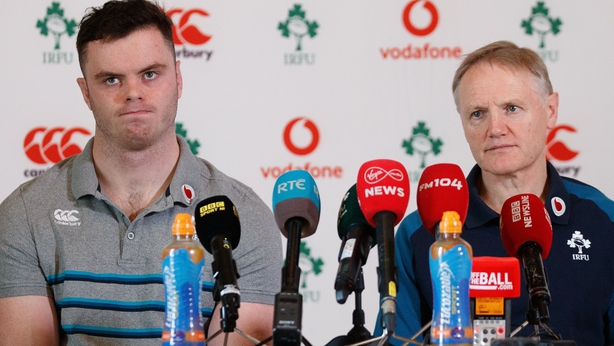 Meanwhile, Schmidt also said the James Ryan, 22, will call the line-outs as new second row partner Tadhg Beirne gets his first taste of Six Nations action on his fifth cap.

"I've learned plenty off Iain Henderson and Devin Toner over the course of the last season or two," said Ryan, when asked about the additional set-piece duties.

"I think it's very much a shared responsibility, obviously, Tadhg calls at Munster and Pete [O'Mahony] has so much experience in that area and so does Besty [hooker Rory].

"There will be plenty of communication along the line in that regard."

Asked what he has learned from the defeats of 2015 and 2017 at the Principality Stadium, Schmidt said: "You just try to be as accurate as you can be.

"We've got to make sure we eradicate [the inaccuracies] as best we can.

"I think we're going there to play because you can't afford to go into your shell. I think they'll have a similar attitude to a degree.

"I think they will certainly play a territorial game, it's the way they've tried to manage the Six Nation so far.

"They will try to make sure that we have to work our way out of our half more often than not."