Eddie Jones was delighted with the way England bounced back from their loss to Wales by thrashing Italy 57-14 on Saturday and took the blame for coaching the players badly in that Cardiff setback which handed over the Six Nations initiative.

England's eight-try demolition job at Twickenham means they can still win the title if Wales slip up at home to Ireland but Jones was still stinging about what went wrong at the Principality Stadium.

"I don’t think I coached the side very well against Wales, I was filthy about that - I let the players down," the Australian told reporters.

"We should have adjusted better and I could have used the finishers better against Wales, and that was my fault, but they all made a contribution today."

The replacements did inject pace after the game began to meander on Saturday but, in truth, the match was done and dusted with them all still snug on the bench after little more than half an hour when Manu Tuilagi ran in his team's fourth try.

"It was a different sort of game and today was a chance to play with a bit more variety," Jones said as England showed little of the kicking from hand that did so much damage against Ireland and France.

Instead, the powerful midfield of Tuilagi and Ben Te'o and the crowd-pleasing athleticism of massive winger Joe Cokanasiga kept England on the front foot.

Cokanasiga was named man of the match and few in the crowd would have begrudged him the honour after his eye-catching runs, with the ball clutched in one hand. 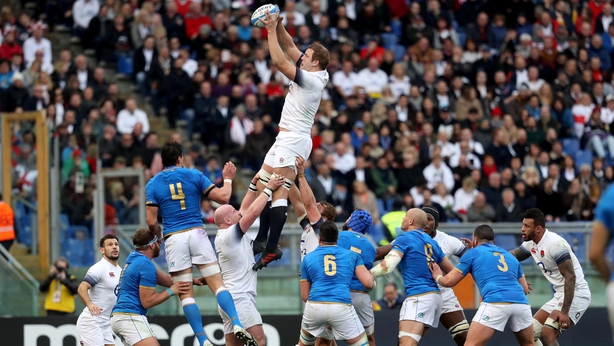 Jones was not quite as impressed with the Fijian-style approach, but was generally delighted by the Bath man's development.

"He did some good things. The one-handed stuff is great for you guys, possibly he'll use two hands another time," Jones said.

"But he's a young kid with great potential. In 2017 he couldn't complete a training session but he's worked really hard. He's got great natural ability and could be one of the best players in the air in the world."

Jones did not hold back in his praise for George Kruis, however, after the lock's two chargedowns created tries - including one for himself.

"Kruis had a fantastic game today," he said. "Those two tries came from working hard right to the end - those are the things that make a team great."

Italy coach Conor O'Shea agreed that England are "the top of the mountain" and will take some stopping in this year's World Cup.

O'Shea bemoaned his side's tally of 23 missed tackles but said the courage shown as they kept at their task despite a host of injuries and England's relentless onslaught made him confident they could finish on a high against France next week in Rome.

"I'm immensely proud of them and I'm sure on our own patch next week we will show something," he said.
Italy have now lost 21 successive matches in the Six Nations and are assured of finishing last for the fourth year in a row.

"You can't ship 57 points and sit in the changing-room talking about the positives," O'Shea added. "But when we did have the ball we caused England some problems and if we show the same heart and work-rate I think we can do well against France."