Ioan Nicholas' first half try was the difference in a 10-6 victory, with Leigh Halfpenny adding a penalty and conversion.

Munster, who had to settle for a losing bonus point, could only muster two Bill Johnston penalties, despite having the lion's share of territory and possession.

Centre Kieron Fonotia led Scarlets for the first time as Wayne Pivac made one change to the side that claimed a bonus-point win over the Cheetahs, with Lewis Rawlins coming into the second row as
Jake Ball was retained by Wales.

Billy Holland captained Munster, who made seven changes to the side that defeated Ospreys, with John
Ryan returning from Ireland duty to start at tighthead prop. Rory Scannell returned to make his 100th Munster appearance.

Despite having only 20 per cent possession in the first half, a magnificent defensive effort saw Scarlets go in at half-time with a 7-6 lead.

Munster opened the scoring after five minutes with a Johnston penalty from a collapsed scrum in front of the Scarlets posts.

Scarlets had little possession in the opening 40 minutes, but they did score a fine try when wing Nicholas went over from Jonny McNicholl's neat pass out of the back door.

That was after the attack was set up by a searching break from Halfpenny, who added the conversion. 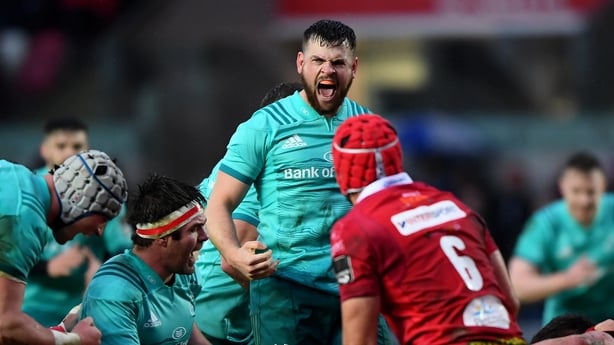 Most of the rest of the half was almost all Munster, who twice camped on the Scarlets line, but on each occasion the attacks were impressively stopped in their tracks by some concerted home tackling.

In the end Munster were forced to settle for a 40th-minute penalty for Johnston after Uzair Cassiem had been caught offside.

It was Scarlets who grabbed the first score of the second half. They pressed the Munster line but had to settle for a penalty which Halfpenny kicked from in front of the posts after 49 minutes.

Munster thought they had gone ahead on the hour mark when lock Jean Kleyn crossed, but the try was ruled out on the intervention of the TMO Ian Davies, who adjudged hooker Rhys Marshall had obstructed in the lead-up to the score.

It was a let-off for Scarlets, who had plenty more defending to do as a Darren Sweetnam break set up a useful position for Munster. But, not for the first time, Scarlets successfully held out.

The introduction of Tyler Bleyendaal at fly-half for Munster saw a change of tactics as he kicked for the corner, but Halfpenny beat Sweetnam to the ball.

Scarlets' line-out did not function perfectly and that put them under pressure in the closing stages, but they managed to hold on in a heroic rear-guard performance.