Joe Schmidt hopes out-halves Johnny Sexton and Joey Carbery will both be fit for Ireland's Guinness Six Nations clash with France in Dublin.

Sexton and Carbery trained separately from the main group at Ireland's open session in Belfast on Friday, but boss Schmidt remains positive that both playmakers will be fit for the France encounter on Sunday week.

Sexton is expected to train fully next week and be ready to face Les Bleus with little issue, but Carbery must prove his fitness in training after hamstring trouble.

"They are both on track," said Ireland boss Schmidt, of Sexton and Carbery.

"Johnny is certainly ahead of Joey. Johnny is going to be fine, he'll train next week. We're hoping Joey will be fit to train, potentially on Wednesday.

"If he can train Wednesday and do Friday then that's sufficient lead-in that he can be in contention, so we'll just have to wait and see, more so on Joey, but we'd be very confident about Johnny." 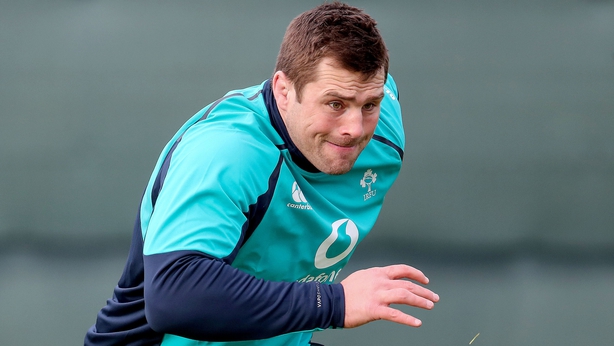 Munster flanker CJ Stander has recovered from the facial fracture he suffered in Ireland's 32-20 opening-round defeat to England, and could return against France.

Lock Tadhg Beirne and back-rower Dan Leavy could come into the reckoning, while centres Garry Ringrose and Robbie Henshaw may also be fully fit for Les Bleus.

"Dan Leavy and Robbie Henshaw trained this morning, so we've got them on a slightly different programme," said Schmidt.

"Dan is on track to train potentially on Tuesday and hopefully he'll train Tuesday, Wednesday, Friday, and Robbie is on the same kind of path at the moment.

"It's how they pull up after training this morning; they worked pretty hard this morning and we'll get a better idea post that.

"CJ [Stander] is fine, he's running around refreshed; he's very keen to be in the mix."

Ireland met the fans in sunny Belfast today - and began their prep for Sunday week's showdown with France #RTErugby pic.twitter.com/5dj12na9LZ