Clontarf took advantage of three of their title rivals all losing on Saturday as they led from start to finish in a 36-29 bonus-point victory over UCC at Castle Avenue.

It was a timely win for the north Dubliners after recent losses to Dublin University and Cork Constitution, as a three-try first-half salvo guided them past the Cork students who are becoming notoriously difficult to put away.

UCC may have lost four of their last six games but they continue to pick up bonus points - four of the try-scoring variety and six losing ones - and they pocketed two against 'Tarf after storming back from a 26-7 deficit early in the second half.

David Joyce converted tries from Matt D'Arcy and Michael Courtney, the latter crossing for the sixth time this season, as Andy Wood's men established a 14-0 lead early in the second quarter. UCC snapped back with a well-worked seven-pointer from winger Michael Clune, but replacement Conor Kelly's try on the stroke of half-time made it 21-7.

The visitors suffered another setback when 'Tarf tighthead Royce Burke-Flynn crashed over to put 19 points between the sides, securing the former champions' bonus-point in the process.

However, UCC again knuckled down and played their way back into contention with their back row particularly influential. Some terrific ball retention and high-tempo play preceded converted scores from captain Daire Feeney and Ryan Murphy.

When number 8 Murphy broke through for his seventh try of the campaign, suddenly it was 'game on' at 26-21. Up popped Mullingar man Sean O'Brien to bludgeon through for his third try in four games, just reward for another robust performance from the former Ireland Under-20 international. Joyce's conversion gave 'Tarf a match-winning cushion of 12 points.

UCC, and out-half James Taylor in particular, made 'Tarf sweat late on as he slipped through for their bonus point score out wide and traded closing penalties with his opposite number Joyce. Their hard-earned bonus points, which looked an unlikely outcome 30 minutes earlier, keep Brian Walsh's youngsters out of the bottom two but they must get back to winning ways in the next two weeks against Shannon and Terenure College.

Cork Constitution's eight-match winning streak came to an end at Temple Hill yesterday as free-running UCD stunned the Division 1A leaders with a 27-22 defeat.

Former Gonzaga College captain Andy Marks bagged a brace of tries for the students and Cork native Paul Kiernan also crossed the whitewash, scoring against the club with whom he started playing rugby as an eight-year-old. He is of rich rugby stock with his dad Michael and grand uncle Tom both stars of yesteryear with Munster, Ireland and the Lions.

After a busy few weeks for club and country, Cork Con gave some of their Ireland Club internationals a rest - most notably captain Niall Kenneally and number 8 Luke Cahill - and promising young centre Sean French, a current Ireland Under-20 international, took the opportunity to shine with a hat-trick of tries.

French's opening try shot Constitution into a 7-0 lead, but three unconverted efforts from UCD backs Nick Peters, Kiernan and Marks had the Andy Skehan-coached visitors 15-10 to the good at half-time. They were rampant at times as their attack fizzed with intent and Conall Doherty, Matthew Gilsenan, captain Alex Penny and Ronan Foley stood out for their individual performances.

Brian Hickey's men were just not at the levels they have been hitting with regularity over the past few months, and UCD kept coming at them, eking out chances which Marks took out wide and hooker Bobby Sheehan from a reliable set piece platform. French did complete his tries of scores to leave just five point between them, but a gritty defensive stand late on ensured UCD deservedly took the spoils.

The home defeat for the leaders is tempered by the fact that Lansdowne also lost, so Con sit eight points clear at the summit and remain very much on course for a home semi-final. UCD have made big gains in the last week with their victories over Young Munster and Con, staying sixth overall but with the big carrot of a place in the top four now just five points away.

Trinity's third victory on the trot, which also produced their sixth try-scoring bonus point, has moved them above Garryowen and into a play-off position with five rounds remaining. Those two sides appear to be on a collision course as they are set to meet at College Park in the final round in mid-April.

Shannon, who had lost their previous two games, hit the front in the 16th minute when tighthead Tony Cusack drove over for the first of his two tries.

Fionn McGibney's conversion kept the hosts ahead at 7-5 after the students capitalised on a yellow card, attacking through the forwards with flanker Max Kearney's pick-and-go effort getting them on the scoreboard in the 22nd minute.

Trinity's second try was all about the pace and continuity of their backs as they released Limerick native and former Ireland Under-18 Sevens captain Ronan Quinn to score out wide. Centre James Hickey did likewise in the 33rd minute, making Shannon pay for their defensive lapses. Micheal O'Kennedy added a terrific conversion into the wind to open up a 17-7 lead.

The gap was down to five points at the interval, a well-orchestrated Shannon try off a scrum penalty and a lineout maul seeing Conor Glynn and captain Jade Kriel carry close to the line before the ball was shifted wide for winger Eathon Moloney to go over in the corner. An early penalty on the resumption allowed O'Kennedy to claw back three points and make it 20-12 to the visitors.

Three minutes later, a thunderous break by Waterford youngster Thomas Ahern, who was sprung from the bench, got Shannon right back into try-scoring range and they worked possession wide for centre Pa Ryan to finish off.

McGibney's extras made it a one-point game, and the scoring dried up until early on in the final quarter when a powerful maul sent Horan over the whitewash for his crucial seven-pointer.

However, it was all hands to the pump after Trinity captain Colm Hogan was sin-binned for not releasing after the tackle in the 71st minute.

Tony Smeeth's youngsters held out for five minutes until Cusack went over in the corner from a ruck, rewarding the approach work of Aran Hehir, Moloney and Ryan. The missed conversion left three points between the sides and with a couple of knock-ons halting Shannon's progress, Trinity showed the necessary composure to hang on.

Bottom side Terenure have now won two of their last three games - and were a missed drop goal away from overcoming Garryowen at Dooradoyle last week - and they put a dent in Lansdowne's drive for a home semi-final with this five tries-to-four home victory.

Key to 'Nure's latest success was a two-try start and once again their backs were in fine form with winger Conor Kelly and centre Adam La Grue crossing to give them a 12-0 lead. There was a yellow card apiece as the breakdown battle intensified and a late bout of forward pressure led to a penalty try for the visitors, reducing the arrears at half-time to 12-7.

The home side's handling was top class at times, drawing in defenders and putting onrushing players through gaps, but back rower Joe O'Brien edged Lansdowne ahead with an early second half try against the run of play. Their third touchdown, finished by former captain Ian Prendiville and converted by Deasy, cancelled out a James Thornton for a 21-15 and some rare breathing space.

James Blaney's men had other ideas, lock Stephen Caffrey using his power and long stride to break through for a well-taken try and then returning winger Jake Swaine raided in from the right for the bonus point score with Lansdowne caught out wide. Mike Ruddock's side wrestled back the lead - 26-25 - thanks to a well-executed maul which led to winger Peter Sullivan's eighth try of the season.

However, Terenure's resilience shown through and they had a game-breaker in young centre La Grue. His excellent footwork set up Swaine's second try of the afternoon and out-half Thornton was able to convert and tag on a late penalty make certain of this much-needed result. 'Nure are now within four points of second-from-bottom Young Munster and only five behind eight-placed UCC, whom they travel to in two weeks' time. 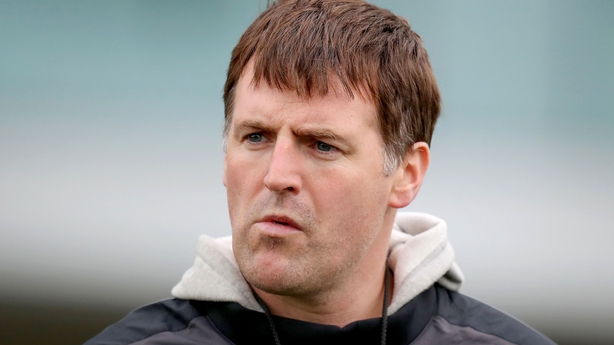 Young Munster head coach Gearoid Prendergast [above] spoke of his relief after his relegation-threatened side recorded their first league win since October with a 12-10 derby defeat of Garryowen at Tom Clifford Park on Friday.

The Cookies, who endured eight losses and a draw in the last nine rounds, edged their way past the Light Blues thanks to four penalty goals from out-half Shane Airey. It was their own disciplined defence which made a massive difference on the night as they bounced back from leaking a 13th minute try to Peadar Collins.

Speaking afterwards, Prendergast told Limerick's Live 95FM: "Probably one of our bigger wins, to be honest. Just a really tough game. They're a quality side, a powerful side. Our defence had to be really disciplined which I thought we were. Early in the game they had a lot of high phases which I think we dealt with that well. It was like a game of chess - who makes the first move - two teams going hard at it.

"It was your typical local derby, what a super crowd may I add. So it was a great atmosphere. I was disappointed with the try, I'd like to see it again on the video. It was after a long defensive block, credit to Garryowen they stayed patient and exposed that short side. But I thought we responded well and didn't panic.

"We put a lot of emphasis on discipline during the week. If you go back to the game in November that cost us a lot. We had a very high penalty count that night and credit to young Ben Healy on the night, he kicked very well (in a 32-26 Garryowen win). We knew tonight we couldn't have that, we had to be very disciplined and focused - just not giving away any penalties in kicking range where they could hurt us."

After chipping away at the home defence through the forwards, Garryowen spotted their opportunity to attack the short side of a ruck and send centre Collins nipping over in the left corner. He also landed a top class conversion and fired over a 36th minute penalty, the latter score in response to two well-struck Airey three-pointers. The visitors were 10-6 to the good at the break.

However, Prendergast's men managed to keep Garryowen scoreless during the second half and put away the few scoring chances that came their way. Airey was coolness personified as he split the posts after 45 and 70 minutes to move the hosts ahead for the first time. He had a drop goal effort come back off the post but it was not needed in the end, as the Cookies fought tooth and nail for a vital victory.