By Michael Glennon at Stadio Olimpico

Live blog on RTÉ.ie and the RTÉ News Now App from 2pm

Live commentary on RTÉ 2fm with Michael Corcoran from 2.30pm 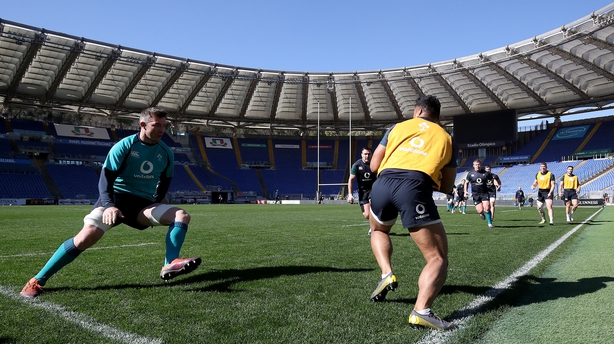 Cohesion, continuity and abrasiveness. That's the stated aim of Joe Schmidt for today's meeting with Italy at Stadio Olimpico.

Stuck in the starting blocks against England, and clipping a couple of hurdles before stumbling over the line against Scotland, the match-up, in the loosest sense of the phrase, provides an opportunity for Ireland to stretch their legs and perhaps lap their opponent.

With that cohesion, continuity and abrasiveness comes a bonus-point win and another step back up the ladder for the Six Nations champions.

The revised acknowledgment that Ireland were undercooked before getting eaten alive by England came from the coach on Friday.

"We weren't quite were we needed to be [physically]," said Schmidt. "[I'd] take a degree of responsibility in that."

The tales of Eddie Jones taking the muzzles off his players during training ahead of the 32-20 loss may had led to what must have been a pretty tasty session in Carton House on Wednesday.

Schmidt has also decided that captain Rory Best, Cian Healy and James Ryan deserve rests, meaning that Sean Cronin gets his first Six Nations start, as do Dave Kilcoyne and Ultan Dillane, who starts in the second row alongside Quinn Roux.

"I think he's had a great attitude this year," said captain Peter O'Mahony about how his team-mate Kilcoyne has progressed.

"He's kicked on, he's carrying the ball well, he's defending well, he's scrummaging well. It's a credit to his attitude that he's got a shot."

Jordi Murphy, who moved from Leinster to Ulster after starring in the former's Champions Cup win in May, gets a well deserved start in the absence of CJ Stander and Conan.

The back line is the same that started in Murrayfield with Chris Farrell getting another chance to form a relationship with Bundee Aki. The English "reality check" spelled out for Schmidt that he may have to bulk up in midfield somewhere in Japan and getting these two men to bond is a very worthwhile exercise.

In-form Connacht out-half Jack Carty is in line for a run off the bench, while Andrew Conway is also rewarded with a squad place, he'll cover the back three.

"You have those who know and work in rugby circles and there is no question it is going in the correct direction and the foundations are in place. It is ready to move forward," Zebre coach Michael Bradley told the RTE Rugby podcast this week when asked how Conor O'Shea's tenure is being viewed in Italian rugby circles.

The Azzurri have lost their last 19 Six Nations games, going back to before the former Ireland international took over and despite Treviso's improved showings and some underage success, a championship win is noted by its absence.

"If we manage to work on the things we can control, we can be very competitive against Ireland," said the ex-Harlequins boss. "The intensity needs to be high at all times – this is the right path, I’m sure of that, but the results need to come too."

There are too many variables going against the hosts, not least the loss of captain Sergio Parisse [concussion] and Sebastian Negri [fever], for them to turn Ireland over today.

England's defeat to Wales yesterday means that Ireland are still in with an outside chance but their likely finale is denying Wales the clean sweep.

On the goal of cohesion, O'Mahony said: "I think our phase stuff is where we’ve worked quite hard over the last couple of weeks, just guys understanding, I suppose, each other more than anything is where we’re going and where we need to be.

Ireland should see the fruits of that today.

'There is no question the direction is the right direction'  - former @irishrugby captain Michael Bradley on @Federugby under Conor O'Shea - full interview on the #RTERugby podcast on Soundcloud #ITAvIRE pic.twitter.com/wv4ngu8FKB