Ireland suffered their first ever defeat to Italy as they went down 29-27 in a highly entertaining game in Parma.

Both sides were guilty of defensive errors throughout as they matched each other with four tries apiece but it was the Italians who did just enough to shade it on the night.

There was the sense that there was something big brewing from the hosts after they lined up for a highly emotionally charged national anthem and it took them just two minutes to open the scoring.

Michela Sillari started the move with powerful run through the centre of the Irish defence before Sara Barratin won a penalty on the ground for her side, which Sillari slotted home with ease. 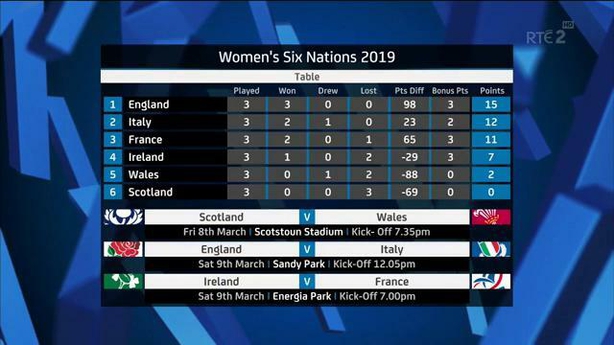 That was an early warning sign of what was to come for Ireland and just three minutes later they conceded the first try of the game.

It was a fine sweeping move from the Italians as they worked the ball across the width of the pitch before Manuela Furlan turned on the afterburners to take the ball within 10 metres of the Irish try-line.

Furlan showed coolness in the tackle to quickly off-load to Giada Franco and she had support outside of her in the shape of Aura Muzzo, who powered over the line, with Sillari kicking the conversion.

Ireland were hardly out of the traps and found themselves 10 points down but made the perfect response thanks to some wonderful quick thinking from Nicole Fowley.

With an Irish penalty being called 15 metres out, Fowley took the opportunity to kick a high ball for Eimear Considine to chase and she took advantage of uncertainty in the Italian defence to pluck the ball out the air and charge over to half the deficit. Fowley rushed her conversion, dragging it wide.

The hectic nature of the game showed no sign of stopping and four minutes later Italy scored their second try. Giada Franco charged down a kick from Kathryn Dane and suddenly the Italians were away, working the ball across the line before Franco popped back up in the right corner to drive it home.

Sillari hits her second conversion but there was barely time to take note of it before Ireland scored their second try and Beatrice Rigoni left her pass short and Considine was the quickest to react, plucking the ball out of the air and sprinting clear of the ragged Italian defence to touch down under the posts.

Fowley made no mistake with her kick and on 31 minutes she then cut the lead to just two points when she kicked a penalty. 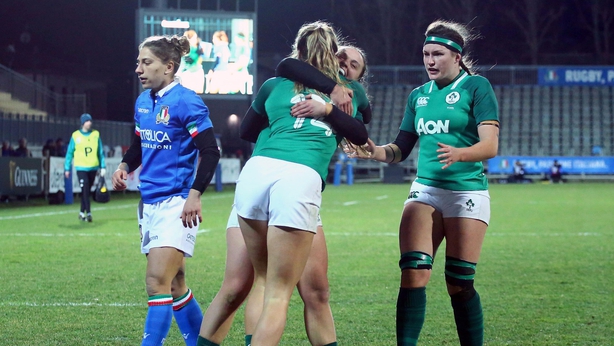 Ireland were in the ascendancy now and four minutes later took the lead for the first time when a quick pick and go from Anna Caplice and another good kick from Fowley put them five points in front.

That lead wouldn’t last until half-time however and some patient build-up play after a fumble from Ciara Griffin saw the Italians create an over-load on the left which Sofia Stefan exploited to level things up, while Sillari’s conversion miss made sure the sides were level at the break.

The second-half was always going to struggle to live up to the frantic pace of the first, but again it was Italy who made the early running.

With 50 minutes on the clock Italy won the turnover on their own 22 and Aura Muzzo charged down the right wing, barrelling through two tackles before off-loading to Franco who got in for her second try.

By now Italy were showing a new-found defensive solidity but they still struggled with the kicking of Fowley and on 65 minutes she hung up a tempting Garryowen for Laura Sheehan in the far corner. The Irish replacement collected the ball and rode a tackle before stretching to touch down.

There was disappointment however when Fowley dragged her conversion just wide of the left upright from a very tight angle, and that miss would prove to be crucial.

As the clock wore down, it was Ireland who looked more tired and they struggled to find the gaps in the Italian defence that they were exploiting in the first half.

Italy, within touching distance of their first ever win over Ireland, found a new resolve and hung on for a famous victory.