Among all the shuffling in the Irish midfield through injuries, one player has remained a constant. Bundee Aki however does not consider himself a leader in Joe Schmidt’s group.

It is 15 months since the Auckland-born centre made his Ireland bow against South Africa, and ever since that 38-3 victory, Aki has been a key figure for Schmidt.

He missed just 24 minutes in the Grand Slam campaign, has started every Six Nations match he has been available for and only twice in his 14 appearances has he failed to complete the full 80 minutes.

The Connacht man has been a fixture in the starting XV, though the same continuity in the 13 jersey has been missing. Garry Ringrose, Chris Farrell and Robbie Henshaw have all suffered injuries in that time period, but the 28-year-old doesn’t feel it has made his job any more challenging.

"You are trying to create different combinations with different people which is really cool," he told RTÉ Sport.

"You know how other guys how they play and what they like to do. I wouldn’t say it’s difficult, it’s about building properly together as a group during the week because you never know who is going to be playing."

Italy will bring special memories for Aki after claiming his first Test debut against the Azzurri 12 months ago. Even if Schmidt does make wholesale changes, it is expected the Connacht centre will remain in place for continuity.

John Cooney and Dave Kilcoyne have gained more time in green this Six Nations, Jordan Larmour continues to learn the ropes while Tadhg Beirne is looking to earn a fifth cap in Rome this weekend. Throw in uncapped provincial team-mates Tom Farrell, Caolin Blade and Jack Carty in the extended panel and there is plenty of inexperience among Schmidt’s seasoned squad.

Dubbed in some quarters as something of a spiritual leader within the team, Aki himself feels that his is not yet among the leadership contingent within the group.

"There are a few guys who have played a lot more games and been there longer than I have. I’m just a guy who stands in behind the scene, listens, and takes in as much as I can from the senior boys," he explained.

"I see myself in the background following the other leaders"

"Obviously for some of the guys who have just come in, I know exactly how it feels to be new and in a new environment. I was helped out when I first came in. I still see myself as a new guy. I see myself in the background following the other leaders."

Has Aki taken time out to support Blade, Farrell and Carty in their new surroundings?

"We chat here and there," he said. "The nines get together – he’d [Caolin Blade] know John Cooney really well and Conor Murray, same with Jack, chatting away with Johnny and Joey as well.

Tom Farrell is very much an outsider to make the match-day squad to face Italy, especially with Henshaw returning to the fold, but the former Chiefs man has been impressed with his attitude since arriving into the team environment.

"Tom is putting his head down, doing what he is told. He is working well, training hard. He is doing exactly what he is doing at Connacht," said Aki.

"I’m sure when Tom gets the opportunity to pull on that green jersey, I’m sure he will perform as well as he does for Connacht."

"When you have a guy like Chris running down your channel, you’d be a bit scared. I know I would be too"

Chris Farrell is looking to make it two starts in-a-row after replacing the injured Ringrose at Murrayfield and Aki says the Munster man offers real bite at 13.

"He stepped in late last year against Wales and he got man-of-the-match," said Aki."He got injured, hasn’t played since and came back in against Scotland and played really well. He’s an unbelievable player, he has a good skill set. He’s a big lad and is hard to take down.

"When you have a guy like him running down your channel, you’d be a bit scared. I know I would be too." 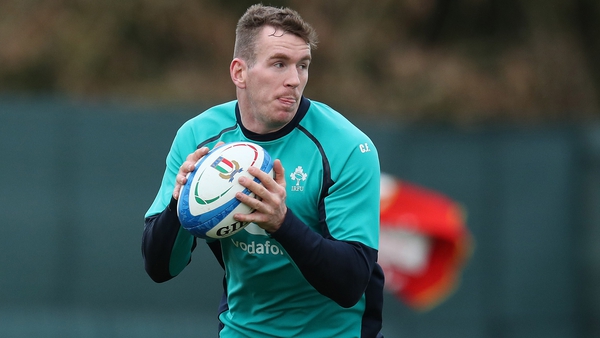