Ulster moved into the Guinness Pro14 play-off places with a narrow 8-0 victory over the Ospreys at the Morganstone Brewery Field in Bridgend.

A second-half try from inside centre Stuart McCloskey on his 100th Ulster appearance along with a last-gasp penalty from scrum-half John Cooney was enough to secure victory for the Dan McFarland's side.

Allen Clarke's Ospreys failed to fire a single shot but remain in third place in Conference A of the Pro14, but are now under pressure with rivals Cardiff Blues hosting Glasgow Warriors on Saturday.

The Ospreys showed plenty of effort in a pointless first half and came closest to crossing the whitewash when Wales wing Luke Morgan raced clear after a neat through ball from Cory Allen.

He was eventually brought down before opposite wing Hanno Dirksen powered his way through three Ulster defenders.

But this Ospreys attack came to nothing as they were turned over. From there on, Ulster enjoyed the vast majority of territory and possession.

Ulster wasted a straightforward opportunity when Kernohan spilt the ball forward, inches away from the try line after some slick handling by his inside backs.

McCloskey also threatened the line but he too got white line fever as he charged towards the line.

It took 47 minutes for the first try to be scored with McCloskey making a 30-metre break into the Ospreys 22 before offloading to Peter Nelson.

The Ulster full-back was brought down just short of the line but the ball was recycled and spread wide by Cooney with McCloskey crossing at the far corner.

Ulster dominated territory and possession in the second half with the Ospreys struggling to cope with their physicality.

But time and time again Ulster's execution let them down with basic errors undermining the vast majority of their attacking opportunities.

Ulster were held up over the line after their driving line-out was repelled by a gutsy Ospreys number eight.

The visitors came to rue their wastefulness as the Ospreys ensured they would have an uncomfortable closing 10 minutes. After some poor discipline by the visitors, Ospreys proceeded to lay siege to
the Ulster line.

The Ospreys kept edging forward with their driving line-out and just when it looked ominous, the visitors somehow managed to turn the ball over to clear their lines.

And with the clock ticking, Cooney nailed a late penalty to take the losing bonus point away from the Ospreys. 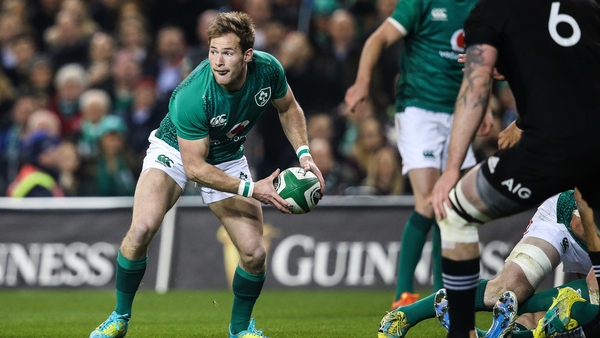 Pro14 teams: Marmion back for Connacht