Tonight against Scotland in Scotstoun (Live on RTÉ2 and RTÉ Player, KO 7.35pm) Ireland will welcome Alison Miller back to the starting XV for the first time since her horror injury, with Adam Griggs' team looking to bounce back from their opening round defeat to England.

The winger fractured her fibula and tibia, as well as sustaining a compound fracture, minutes into the 2018 Six Nations game against Italy.

"When I was in the hospital that day I definitely didn’t think I would play again," Miller told RTÉ Sport.

"The severity of the pain, the seriousness of the injury, my age.

"Definitely in those moments when I came off the pitch I did think I wouldn’t be able to play again or I won’t be able to get back or this is it, I’m done."

As time passed, Miller started to see improvements and began to see a way back to playing rugby and representing her country again.

All the hard work eventually paid off when she made it back onto the pitch for the last 20 minutes of Ireland's Six Nations defeat to England last week.

"That’s the great thing about time, you can see possibilities.

"What helped was the progress every week, you could see the possibilities, once the pain eased and once you started weight bearing, and you started walking and jogging, I thought then why not.

"People did say funny things like 'ah you’ll never get back, that is career ending'. One lad came up to me in a coffee shop and said 'I saw it. That’s it, you are done, you’ll never play again'.

"In the first few weeks you are trying to stay positive and people are saying things like that. 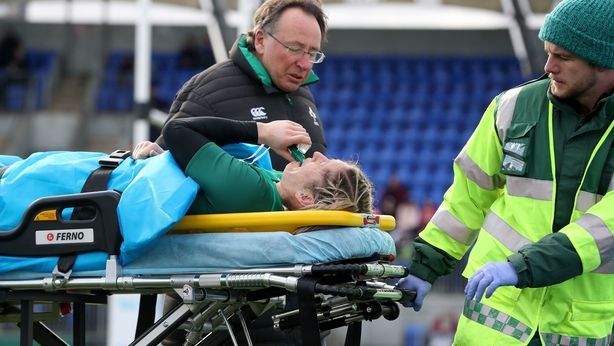 "I tried not to think too much about the injury, yes it was an injury, it took me out of the game, I just tried to focus on what rehab I was meant to do and see it as a process.

Miller has an athletics background so getting her running technique right again was important. She joined up with Shane McCormack, coach of Phil Healy, Ireland’s fastest woman, to make sure she was doing things right.

"I’ve known Phil’s coach Shane for the past ten or twelve years, he helped me before last year’s Six Nations and the 2017 World Cup.

"He had been on to me, he said 'we are ready for you when you are ready to come back'. It took a while to get back there but it really helped because with a serious injury like that, learning to run properly is a big thing.

"If your form is wrong and you go back then you are more likely to get injured in some other part of your body or to do a similar injury.

"The technical speed drills like that really helped and it was something to focus on, it was a support group as well and great to see Phil, the athlete herself, and the other guys she was training with, really top athletes, to see how they immerse themselves in that environment."

Follow Scotland v England via our liveblog on RTÉ.ie/sport and the News Now app. Watch live on RTÉ 2 and the RTÉ Player from 7pm or listen to live national radio commentary on RTÉ Radio 1 Extra from 7.35pm.