England's stunning start to their Guinness Six Nations title quest has come at the cost of a potentially serious injury sustained by Maro Itoje.

Eddie Jones declared "we're nowhere near our best" after four tries were engineered in a superb 32-20 victory over Ireland that produced a first win at the Aviva Stadium for six years.

But probably the finest performance of Jones' 36 Tests in charge was soured when Itoje limped off with a knee problem incurred during a 54th-minute ruck, the outstanding Saracens lock reeling in pain.

It was serious enough for referee Jerome Garces to state "I think he's broken his leg", but Jones revealed the extent of the injury will only be indicated by a scan.

"Maro's probably got some sort of medial ligament but like all these things you never know until they get an MRI," said Jones, who added that Kyle Sinckler's departure was due to tiredness and not a knock.

Henry Slade crossed twice and Jonny May and Elliot Daly also touched down as England overran opponents who entered a captivating clash as pretenders to New Zealand's throne, but have now been supplanted as tournament favourites.

"The intensity at which we played pleased me most," Jones said. 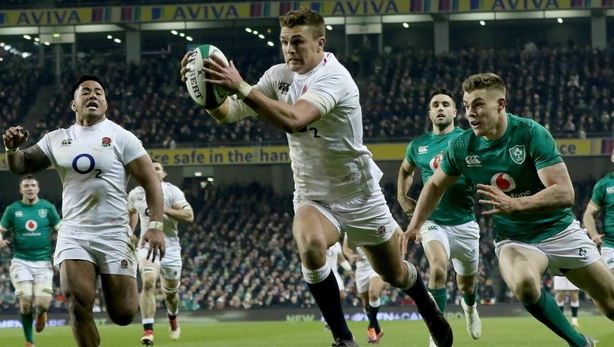 "When you play Ireland at home you know it's going to be a physical game and we prepared for that.

"We knew we had to win that battle to win the game. Some games are immensely physical, some are more tactical. We probably shaded them a bit in that area.

"We know they're a top team. They're well coached, well drilled. I thought our intensity, particularly in the first part of the game, was outstanding.

"The only thing I know is that the next game will be better. We are a team that's still going. We're nowhere near our best. We're looking forward to playing better than that - and we will."

Ireland were heralded by Jones as the strongest team in the world leading into the Dublin collision, but having dispatched them with a near-faultless display he refused to make any bold predictions for Japan 2019.

"These games have got nothing to do with the World Cup," Jones said. "They are stand-alone games that are important between a very good Ireland side and an improving England side.

"We'll start worrying about where we're standing in the World Cup when we're 10 days out from the first game against Tonga.

"I don't think that (Ireland being the best team in the world at the moment) changes in one game. They've been consistently good."