Ben Youngs has braced England for mayhem in Saturday's Guinness Six Nations clash in Dublin by declaring that Ireland are "mad about the fight".

On the four occasions Youngs has played at the Aviva Stadium he has triumphed only once in a sequence scarred by harrowing defeats in the Grand Slam matches of 2011 and 2017.

And the Leicester scrum-half has detected a theme running through the losses in the form of Ireland's ferocious appetite for causing havoc.

"With Irish teams you talk about their passion, but really they just love the fight. They are just mad about the fight," said Youngs, who is set to continue in the number-nine jersey.

"When I say the fight, I am talking about the breakdown, the aerial stuff, the bits of the game that are no-talent-required, niggly stuff.

"When I go to Ireland, whenever we come unstuck, they are just mad for the little fights. I'm not talking physical fights.

"I look at times, with club or country, when we've come unstuck, and it's been around that area of the breakdown.

"They've just been able to deal with it better, make it slow and frustrating for you. So there's no surprise we've spent a lot of time focussing on the breakdown."

Youngs believes the key to diffusing the reigning champions' onslaught is for England to bed their ball carriers into the game as early as possible.

Eddie Jones' underdogs have been strengthened by the return to fitness of Mako and Billy Vunipola, Joe Launchbury and Manu Tuilagi, all four of whom are capable of scattering Irish tacklers. 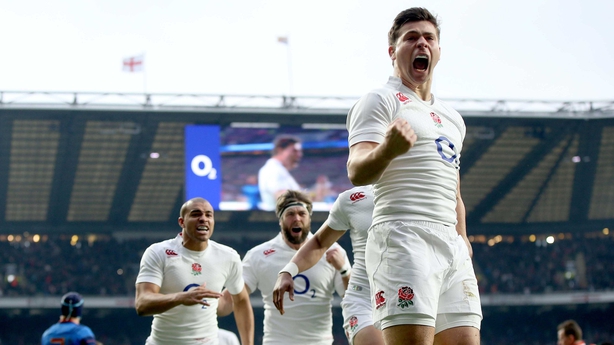 "It all comes down to momentum. It's a lot easier with momentum, if you are on the front foot it's a lot harder for them to compete," Youngs said.

"It's really important to get momentum and sustain momentum. Once we've got those guys getting us forward, we've then got to keep going forward.

"If you are getting in behind them, it becomes a lot harder for them to repeatedly get off the line. All teams blitz, but it's a lot harder when you are going backwards.

"You're looking at your forward pack to get you on the front foot and really win those collisions."

Jones believes that against Ireland there are two key battlegrounds - on the floor and in the air.

The second of those is in reference to the aerial bombardment that half-backs Conor Murray and Johnny Sexton will unleash and Youngs believes there is no better full-back to defend against that threat than Mike Brown.

Brown was dropped last autumn with Elliot Daly continuing in the 15 jersey, but the Harlequin could be recalled for the Dublin showdown.

"Mike's the most-capped England full-back, so his experience is huge," Youngs said.

"His ability to operate under the high ball is probably the best in the country. A phenomenal strength of his game is dealing with the high ball.

"You suspect Ireland will certainly test us in those areas, with contestable kicks through Conor and Johnny, and use that as weapon as they have done in the past.

"So seeing someone like Mike back involved in the squad is terrific."