England's defence coach John Mitchell believes Ireland will "try and bore the s*** out of us" in their Six Nations encounter on Saturday.

Mitchell feels Ireland are so competently drilled that they win the battle of concentration.

"Ireland are arguably the best in the world, and Ireland for me are a well-coached side," Mitchell told the BBC.

"They are resilient, they will try and bore the s*** out of us basically. It will come down to a small piece of position when you are not focused they can hurt you."

Mitchell also believes that England must approach their potentially decisive Six Nations title clash with Ireland as a moment to seize.

Eddie Jones' men head to the Aviva Stadium knowing that victory would land an early blow in their quest to reclaim the crown they surrendered to Dublin last year.

Grand Slam holders Ireland are positioned second in the global rankings behind leaders New Zealand, whom they defeated in Dublin last autumn.

"It's our aim to win the Six Nations but first up is Ireland and arguably they are the best team in the world.

"If you're going to play the best team in the world, you might as well get into them straight away.

"They've deserved all the honours that came their way in 2018. Having them first up makes the challenge even more exciting.

"It's a challenge that you don't over-think, instead you walk towards it and embrace it.

"It's always been tough playing there, but it's even harder now because they're a well coached side. They're very consistent and have a process they're very confident in." 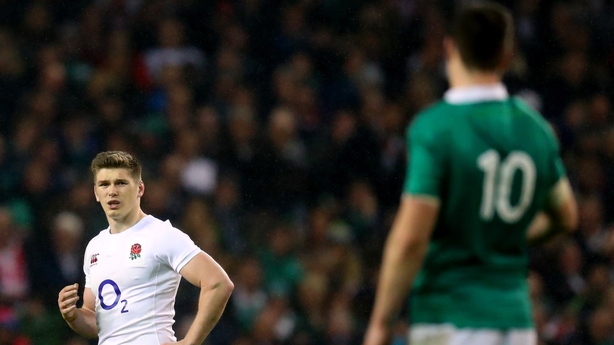 England on Thursday name their team for the first of nine Tests before the World Cup begins in September with the fitness of Brad Shields and Joe Cokanasiga the outstanding concerns.

Owen Farrell has made good progress after undergoing thumb surgery and is on course to lead the team in Dublin, but Shields and Cokanasiga have until Wednesday to prove they have fully recovered from their respective side and knee injuries.

"Our main session is on Wednesday. We'll be in a better position by then to know exactly where we'll be at with individuals," Mitchell said.

"Brad is progressing really nicely. He was in contact conditioning and is moving nicely.

"Owen has been integrating further and further as the sessions have gone on. He's very vocal and very energetic. It looks like he's enjoyed little bit of a break.

"He's been jumping into contact progressively and seems pretty good and isn't shirking any of his duties."

Mitchell revealed that flanker Jack Clifford, who was not expected to be included in the matchday 23, has returned home after sustaining a head injury in training.