Ulster head coach Dan McFarland was impressed with his players as they sealed their first European Rugby Champions Cup quarter-final spot in five years following their 14-13 comeback win at Leicester.

McFarland's side trailed 13-0 after 50 minutes minutes with Matt Toomua's first-half try added to eight points from the boot of George Ford.

"I'm really pleased, and the second-half performance showed everything about what we are," said McFarland.

"We had to turn the game around. In the first half we weren't even close to what we're capable of playing but we turned that around to a large extent and some of our defence was magnificent.

Subject to other results in this weekend's Champions Cup, Ulster are likely to play Leinster at the Aviva Stadium in the last eight.

And McFarland insists he does not mind who his side play in the next round.

He said: "I don't mind (who we play), we're in a quarter-final. Any side will be really tough and we're going away from home. We'll play one of the four best sides in Europe but we're in the top eight so that's great."

Ulster were nervy in the early exchanges at Welford Road, which allowed Leicester to command a comfortable half-time lead. 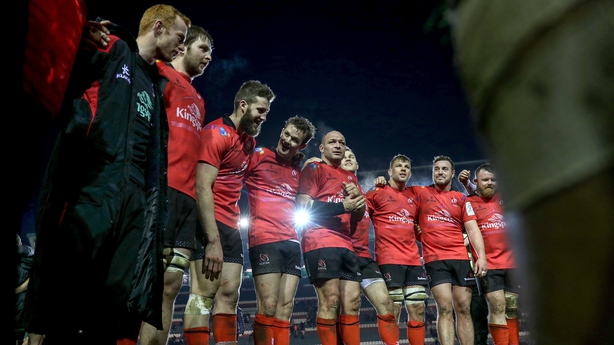 Toomua collected Ford's grubber kick for the game's first try adding to an earlier penalty from the England international.

After the break, Ford kicked his second three-pointer but Ulster came back with two quickfire scores.

He said: "It was a physical game and there was a lot of blood on the floor in the changing rooms and tired bodies.

"There was endeavour, and I can't criticise the players for not working hard enough, but we just weren't smart enough.

"We were loose with the ball, the forwards went to work quite a bit and the backs let us down, turning the ball over and running into touch too often.

"It just kills you. We got the ball into Ulster's 22 three or four times, but we were really loose after that. You can't visit the oppositions goal zone without scoring points so it's really frustrating."