The Thomond challenge - would anyone willingly take it on?

Exeter Chiefs are the latest side tasked with turning over Munster on their own patch in the last pool game of the European Cup but - and they are all too aware of it - the stats do not bode well.

Of the 23 climactic pool collisions Munster have played since 1996, the province have lost just five - and only one of them came at home.

Leicester Tigers dug out a 13-6 Pool 4 win 11 years ago. Munster still progressed to the knockout stages but only as runners-up and they subsequently lost at the Scarlets in the quarters.

That result has proven to be the exception and not the rule: Munster just don't lose these games in their own back yard.

They are currently unbeaten at home in Europe in 11 games and are targeting an 18th quarter-final appearance in 21 seasons.

Exeter must claim four more match points than their opponents tomorrow to snatch an unlikely quarter-final place and join Leicester on an elite and short list.

Munster have a nice habit of feeding off their own fans when it comes to the crunch. They've done it time and time again.

They failed to make the quarters, finishing third in Pool 4 behind Harlequins and Cardiff but Munster still stung Quins - with costly consequences for the Premiership side.

Mick Galwey and Co turned over the visitors who topped the pool but went into the quarters as only the fifth best group winners. That meant they had to travel to Toulouse in the last eight, where they suffered a 51-10 thumping.

Bath watched this one with their fingers crossed; they needed Munster to slip against the Frenchmen to keep their own hopes alive.

But tries from Anthony Foley and Dom Crotty put paid to that as the Reds topped Pool 4 to march on. They'd eventually come undone in the semis, agonisingly falling short in a 16-15 loss to Stade Francais. 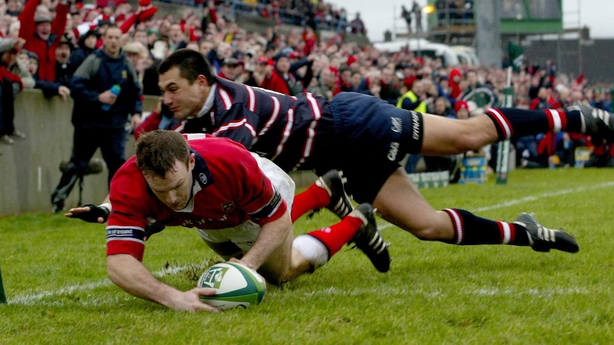 The Miracle Match. There's been plenty of talk of 'Fortress Thomond' this week; this extraordinary game went some way to enforcing that reputation.

Needing to beat Gloucester by four clear tries and 27 points to squeeze out of Pool 2 with Perpignan, they pulled it off against a side who were running away with the Premiership and had comfortably beaten them at Kingsholm.

John Kelly's try at the death and Ronan O’Gara's subsequent conversion - the outhalf later claimed he didn’t even know his kick was required - did the trick, sparking wild, raucous celebrations. Munster would again be beaten by a point in France in the semis, this time by Toulouse.

Progression as pool winners was secured against Bourgoin 14 years ago with this commanding victory, but the crucial bonus was only delivered five minutes from time.

Gloucester had earlier thumped Treviso so Munster knew they had to do the same heading into this clash. Mike Mullins, Paul O'Connell and Peter Stringer crossed the whitewash to tee it up; a collapsed five-metre scrum in the 75th minute saw the referee award a penalty try that sealed it.

On another raucous afternoon in Limerick, Sale Sharks wilted. Anthony Foley, Ian Dowling and Barry Murphy touched down before the break, with David Wallace adding a fourth on the turnaround.

That meant Munster topped Pool 1 ahead of the Englishmen and it proved the catalyst for the maiden European glory they so craved. Perpignan were gobbled up in the quarters, Leinster were dispatched in a derby semi-final and they defeated Biarritz in Cardiff to finally get their paws on the big one. 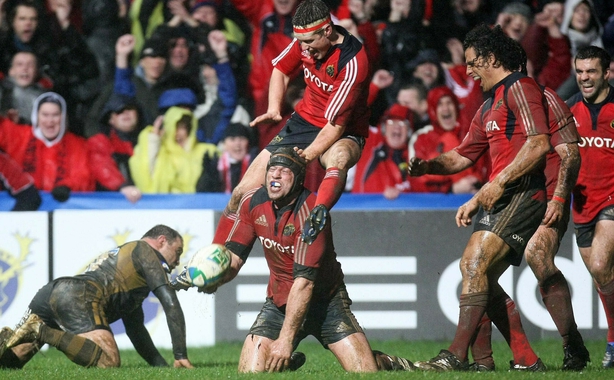 Wasps were the reigning champions but they left Ireland with their title defence in tatters as the Donncha O’Callaghan-inspired hosts stomped into the knockout stages. Ronan O'Gara played no small part either, kicking four penalties and converting Denis Leamy’s try in the 74th minute.

They went on to negotiate a tough away trip to Gloucester before edging past Saracens at the Ricoh Arena in the last four. A second European Cup was lifted in Cardiff when they faced down Toulouse 16-13.

Once again the trusty right peg of Ronan O'Gara steered Munster to victory, setting up a home quarter-final in the process. His four penalties were enough to sink the Saints, though their Thomond pain was only starting.

Northampton suffered another loss when they met at the same venue in the last eight in April.

Munster's run then came to an end against Biarritz, who lost to Toulouse in an all-French final at the Stade de France.

This was not as comfortable as the scoreline would suggest. Munster ran in for three tries in the last 10 minutes - from Niall Ronan, a fresh-faced Keith Earls and Darragh Hurley - to break down the dogged exiles.

The bonus-point win still wasn't enough to send them through however. Munster headed for the Challenge Cup, where they'd lose at Thomond to Harlequins in the semis 20-12 - a rare big-day defeat on home soil. 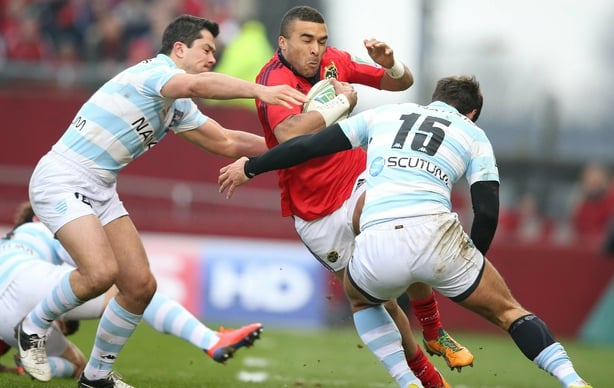 It was another case of  'Munster need to... Munster do' in Limerick as, a decade on from the memorable Gloucester win, Munster bagged the bonus-point win they needed to progress as one of the best runners-up.

Simon Zebo scored a brilliant hat-trick at a bouncing Thomond, with Conor Murray and Mike Sherry also getting in on the act. After that came a terrific win at the Stoop against Quins in the quarters but Clermont ended the dream for another year in the last four.

Rob Penney's men had lost at Murrayfield in their opening pool game but revenge was ruthlessly served up as Munster sealed a home quarter-final.

James Coughlan, Johne Murphy, Peter O'Mahony, Conor Murray, Simon Zebo and Felix Jones racked up six tries as the bonus they required was clinically delivered. Toulouse were swatted aside in the last eight but Toulon proved too strong in the semis and the Top 14 side would go on to claim the trophy with a 23-6 defeat of Saracens in the decider.

The love affair with do-or-die ultimatums was rekindled with this gutsy success, one which secured knockout rugby in Europe's top-tier competition for the first time in three years. Munster needed to win by 11 points or score four tries in order to earn a home quarter-final. They did the former thanks to tries from Simon Zebo, Ronan O'Mahony and Ian Keatley.

Toulouse were turned over in a swashbuckling home display which sent Munster galloping into a semi-final against Saracens. There, they ran into a brick wall, the Premeiership side easing to victory at the Aviva before seeing off Clermont in the final.

Eoin Murchan on speed over height, a new Dublin era & focusing on the greater good