Second row Quinn Roux says it is a "massive honour" after he was selected as Connacht captain for the away trip to Bordeaux Begles in this weekend’s Challenge Cup.

The South Africa born lock moved to the Sportsground in 2014, initially on loan from Leinster, and has become a key figure for the province in that time.

The 28-year-old has won seven international Ireland caps since making his Test debut in 2016 and says he can’t wait to lead the team out in Bordeaux.

"It’s a big honour for me," he told RTÉ Sport.  "I’ve been part of this club now for the past five years and I’m very much settled into the community. They have been really good to me and I’ve made some lifelong friends.

"It’s a massive honour to be the captain,"

"I’ll try to be myself and not do too much different. I want to lead by example." 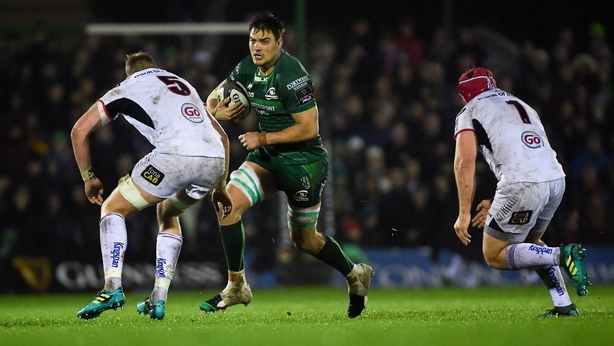 The former Stormers man penned a new two-year contract back in October and says he is fully committed to the province.

"We call Galway our home now. My wife is really happy here. It was an easy decision to make."

The midfield partnership is made up of Bundee Aki and Tom Farrell, both of whom were named in Ireland’s Six Nations squad this week, while in the back three, Matt Healy and Darragh Leader will start on the wings and Tiernan O’Halloran at full-back.

In the pack, there is a return to action for number 8 Eoin McKeon, who starts his first game since suffering a shoulder injury against Glasgow on the opening day of the season. He forms a back row alongside flankers Paul Boyle and James Connolly.

Up front props Pete McCabe and Finlay Bealham are joined by hooker Shane Delahunt. In the second row Gavin Thornbury will partner Roux.

Connacht, on 17 points, lead the mini-table of second-place teams across the five Challenge Cup pools and a win away at Stade Chaban Delmas on Saturday would be enough to qualify.