Leinster scrum coach John Fogarty has stressed the importance of claiming a Heineken Champions Cup pool victory over Wasps on Sunday and with it, a home game in the quarter-finals.

Leo Cullen’s charges travel to the Ricoh Arena knowing that victory over Wasps will see the finish top of Pool 1 and will give them home advantage in the knock-out round.

Last weekend’s victory over Toulouse at the RDS means that Leinster have their fate in their own hands as they lead the French side by three points at the top of Pool 1.

A win at Wasps will ensure that Leinster finish top of the pool no matter what the outcome elsewhere, and Fogarty revealed that has been their target since the start of the competition.

"That’s the ambition since the start of the season, to be able to achieve a home quarter-final," he told RTÉ Sport.

"You’ve seen in the past how important that is in this competition and that’s what we’re fighting for.

"There’s a lot of rugby left for us to get to that point and for us as a group it starts today. Reviews have happened, coaches were in yesterday, planned and meet about the squad and the direction we’re going to go in for this Wasps game.

"It’s going to be a great game, they’ve got back [Jake] Cooper-Woolley, [Joe] Launchbury and [Nathan] Hughes into their pack. They’ve had a home win against Northampton and they really seemed to celebrate all the little bits in that game.

"We’re going over and we’re expecting a stiff challenge and we’re going to have to be right on top of it."

There is still the slim possibility that Leinster could bow out of the competition before the quarter-finals although it would take an unlikely sequence of results. 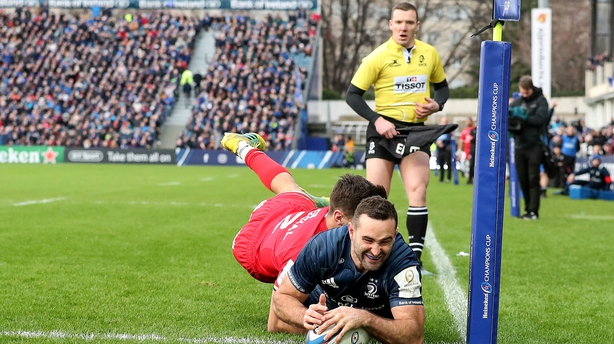 If Montpellier beat Edinburgh, with the Scottish side claiming two bonus points and then Glasgow, Munster, Ulster and Toulouse win, defeat for Leinster would see them crash out.

"I don’t think the players are going to be focusing on other teams, I think it’s important that we’re focused on ourselves," he said.

"You can look at all the permutations but for us in here, we don’t tend to do that. We’re preparing as best we can for what’s going to be a tough game.

"All we can do is get a maximum of five points, we can get four points, we can draw the game or we can lose the game, so we’re focusing on the game first, trying to get as much as we possibly can from out of that game and we’ll know where we sit then."