Leinster head coach Leo Cullen was in a buoyant mood after his side made light of some high-profile absentees to record an emphatic 29-13 bonus-point win over Toulouse in pool one of the Heineken Champions Cup.

Despite taking to the pitch without captain Jonathan Sexton - in addition to the experienced international trio of Rob Kearney, Robbie Henshaw and Devin Toner and the suspended James Lowe - the defending champions scored four tries to leapfrog Toulouse into pole position heading into next weekend's final round.

After watching Dave Kearney, Sean Cronin and Adam Byrne touch down in the second half to add to Jack Conan's 34th-minute effort, Cullen said: "To get the win and bonus point is doubly pleasing.

"Conditions were difficult out there but we managed possession quite well in the first half. Toulouse had this big wall of defenders the whole time and our guys showed good patience to keep hold of the ball.

"It was much better at the start of the second half where we played in their half of the field and picked off a few scores when they came along.

"I'm delighted for the guys, we had a lot of young guys out there today and it was a huge step up for them. We're delighted to get that win. It was a very positive step for a lot of our younger guys.

"A lot of guys have been fighting hard to get into the team. They've been very unlucky at various stages during the year with selections. It's a good competitive group at the moment.

"They all want to be involved, they know what's at stake. They know there's big games coming up, whether that's with Leinster or with Ireland." 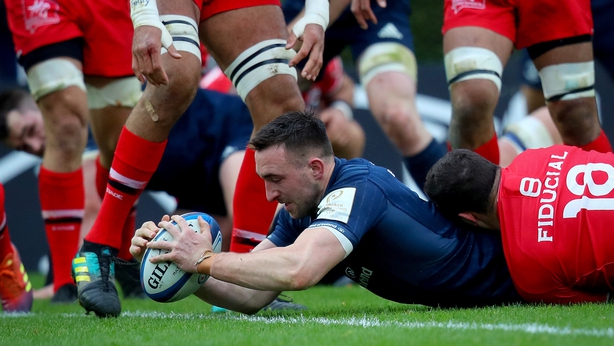 Sexton's deputy at fly-half, Ross Byrne, was one of those to impress as Leinster put themselves on the cusp of securing a home quarter-final, which they will be hoping to achieve away to Wasps next Sunday.

South African flanker Rynhardt Elstadt feels it was a good learning experience for the French side.

"We didn't focus on anyone that's missing (for Leinster)," he admitted afterwards. "Because when they played us (in Toulouse in October), we didn't have a lot of players as well. The next guy in their place is just as good and they showed it out there this afternoon.

"You can feel the difference, the way the (Leinster) boys are performing and playing together as a pack. If you want to test character and you want to pitch yourself against any team, that's the team to play against. It was probably one of our most physical games of the season.

"In the first half, we had some good defence and I thought we did really well. But Leinster are a really phenomenal team. They have really good finishers, they know how to finish, they're a class finishing team.

"I just think we lacked a bit of edge today. Leinster are right up there as one of the teams to beat this year, they're really, really good."