Leinster ended Toulouse's unbeaten run in this season's Heineken Champions Cup as a terrific bonus point victory at the RDS secured their quarter-final place with one round remaining.

Jack Conan's 34th-minute try gave the defending champions a 10-6 lead after playing into a strong wind in the first half, with Thomas Ramos kicking two penalties in reply for Toulouse.

The hosts, despite a significant list of absentees that included captain Jonathan Sexton, Rob Kearney, Robbie Henshaw, Devin Toner and Dan Leavy, then went on to dominate the second half with three further tries.

Dave Kearney, Sean Cronin - the Ireland hooker's ninth in 12 appearances - and Adam Byrne all crossed as Leinster claimed a victory that moves them top of Pool 1.

Having been kept quiet for the most part, Toulouse back Cheslin Kolbe wriggled free to run in a last-minute consolation try for the French side, whose quarter-final hopes rest on next Sunday's final-round clash at home to Bath.

Sealing a home quarter-final will be Leinster's aim when they visit Wasps at the same time. 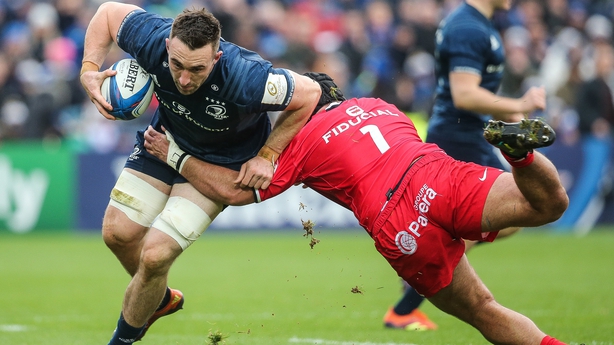 A seventh-minute penalty from straight in front saw Ross Byrne kick the hosts ahead, punishing Richie Arnold's tackle off the ball.

Ramos levelled after Toulouse -  who beat the champions 28-27 at home in October - gained momentum at a scrum in the hosts' 22, and the French club's resilient defence held out from 38 frantic phases sparked by Jordan Larmour's jinking run.

However, Conan's man-and-ball tackle on Jerome Kaino, coupled with further incisive running from Larmour and Kearney, kept Leinster on the front foot and the pressure led to a number of penalties against Toulouse.

Luke McGrath was held up short before Adam Byrne threatened out wide, and number eight Conan took a great line onto his scrum half's pass to crash over.

Ross Byrne's conversion was followed by a soft three points at the other end, Ramos punishing Rory O'Loughlin for playing the ball off his feet.

Leinster crucially hit back within 10 minutes of the restart, Kearney superbly collecting Ross Byrne's cross-field kick, absorbing Romain Ntamack's challenge and reaching over to score in the left corner. 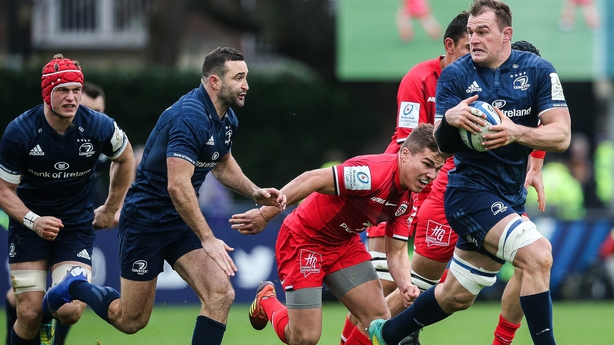 The swirling wind foiled Byrne's conversion attempt and as Leinster went for the jugular, Dupont's interception denied Cronin a try in the same corner.

But the score arrived on the hour mark when the experienced hooker reached over from a ruck, although the attack was marred by a worrying leg injury to McGrath.

Leinster replacement James Tracy won a big penalty at the breakdown, as Toulouse's forwards missed out on a much-needed try.

Kolbe's subsequent reply was too little, too late