Having missed the entire Christmas period, Connacht are boosted by the return of full-back Tiernan O’Halloran ahead of Saturday's European Challenge Cup encounter with Sale Sharks at the Sportsground, (kick-off 3pm).

The Galwegians man has recovered from a leg injury, which ruled him out of three matches over the festive season, and will bolster the side as they take on the Pool 3 leaders.

Connacht can move into top spot in the pool with victory over the English side on Saturday and Andy Friend has named a XV that also includes a new midfield pairing, with Bundee Aki and Kyle Godwin both coming back into the starting team.

Following his contract extension earlier this week, Jack Carty continues at out-half where he is partnered by former Sharks scrum-half James Mitchell. 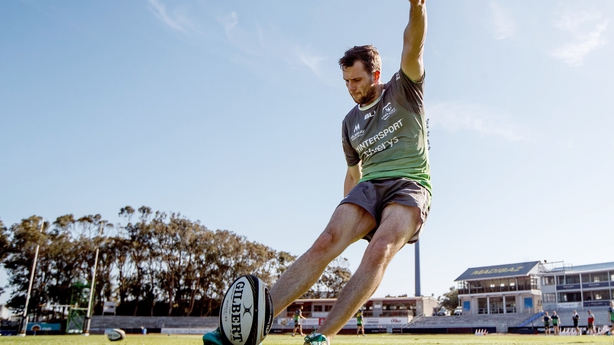 In the front row, Denis Buckley is named at loosehead having recovered from illness that ruled him out of the clash with Munster. Buckley will make his 150th appearance for the province against the Premiership side following his late withdrawal last week.

There is also a new second row partnership with Ultan Dillane and James Cannon coming into the side, while in the back row captain Jarrad Butler returns from injury and is named at number 8 alongside James Connolly and Eoghan Masterson.

With Connacht sitting just three points behind Sale in Pool 3, the result on Saturday will have a huge bearing on who qualifies for the knock out stages of the competition.

Connacht head coach Friend believes that his side have improved hugely since the teams last met in October.

"Sale are a really good side and we saw the quality they have when we played them away earlier in the season," said Friend.

"Since then though, we have improved with every game and we also picked up a vital away win against Perpignan in the competition before Christmas."

"We are very much alive in two competitions and want to reach the knock out stages in both."