Rob Kearney returns from injury to lead Leinster into Saturday's Guinness Pro 14 clash against Ulster at the RDS on Saturday, (kick-off 5.15pm).

The veteran full-back has recovered from a dead-leg, picked up in Leinster’s last Champions Cup game against Bath on 15 December, and starts at full-back for the visit of Dan McFarland's side to Dublin.

Barry Daly and Jack McGrath also return from injury and have been selected to start Saturday's encounter.

Daly has recovered from a knee injury and will start on the left wing. It's his first game since August when he lasted only 11 minutes in the first game of the season away to the Cardiff Blues.

From the team that started in Munster last week, Adam Byrne comes in on the right wing, while Conor O'Brien starts in the centre.

Jamison Gibson-Park and Ciarán Frawley are the half back pairing for the first game of 2019, replacing Luke McGrath and Johnny Sexton.

The returning McGrath has been absent since November following a minor hip procedure and takes his place in the front row alongside Seán Cronin and Andrew Porter.

Ross Molony and Mick Kearney start in the second row with Josh Murphy, Scott Penny and Max Deegan the back row.

On the bench there is a potential debut for Lansdowne's Oisín Dowling in the second row. The 21-year-old, who has ten Ireland Under-20 caps to his name is in his second year at the Leinster academy. 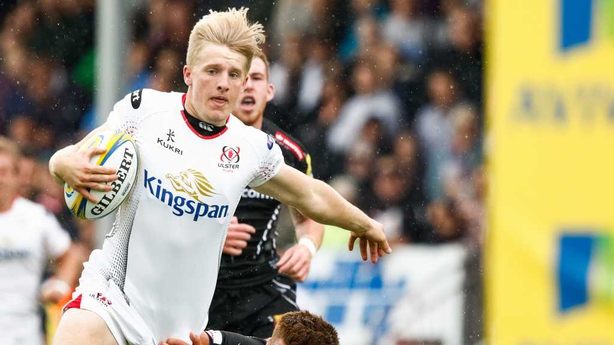 Rob Lyttle returns from a lengthy spell on the sidelines to start for Ulster.

Lyttle, who scored two tries in his last outing for Ulster, against Southern Kings back in February 2018, will start on the right wing and is joined in the back three by academy pair Angus Kernohan and Michael Lowry.

Ulster have named a much-changed side for the trip to Dublin, naming four academy players to start, with Matthew Dalton and James Hume joining Kernohan and Lowry in the first XV.

Hume and Darren Cave are paired together in midfield, with Dave Shanahan and Johnny McPhillips set to combine in the half-back positions.

Up front, Greg Jones will make his first start of the season after being included in the back row alongside Sean Reidy and Nick Timoney.

Alan O’Connor has recovered from an injury sustained against Cardiff Blues in early December and will partner Dalton, who will make his first appearance of the season, in the second row.

Wiehahn Herbst is another to have returned from injury, having not featured since September, and he will pack down in the front row with hooker Adam McBurney and loose-head prop Kyle McCall.

There are two potential debutants named on the bench as versatile Banbridge forward Caleb Montgomery and Ballymena fly-half Bruce Houston, another academy prospect, are included in the panel.

Forwards John Andrew, Andy Warwick, Tom O’Toole and Clive Ross, along with backs Jonny Stewart and Peter Nelson, make up the remainder of the matchday 23.