Leinster have been handed a timely injury boost with the news that Rob Kearney and Jack McGrath are in contention to face Ulster in the Guinness Pro14 on Saturday.

Kearney has recovered from a dead-leg he picked up in Leinster’s last Champions Cup game, while McGrath has been absent since November following a minor hip procedure.

Barry Daly is also available for the province after a lengthy spell on the sidelines with a knee injury.

Leinster will be without Dave Kearney however. He suffered an adductor strain in the warm-up ahead of his side’s Pro14 clash with Munster just before Christmas and won’t be risked.

Coach Felipe Contepomi confirmed the news and said: "The only one who would not be available this week is Dave. Barry is back, Jack McGrath and Rob, they are back in training and fit for selection."

Contepomi was unable to put a time-frame on Dave Kearney’s return and revealed that he is still being monitored.

"We are still assessing because it was a very late call and we have to take precautions. He’s got a stiffness and he just pulled out of the game at the last minute."

Leinster come into the clash with Ulster off the back of a 26-17 defeat to Munster in Thomond Park in which the Blues had disciplinary issues on the pitch.

Munster made the most of Leinster's ill-discipline as props Cian Healy and Tadhg Furlong were both sin-binned and Kiwi star was James Lowe sent off for taking out Andrew Conway in the air. 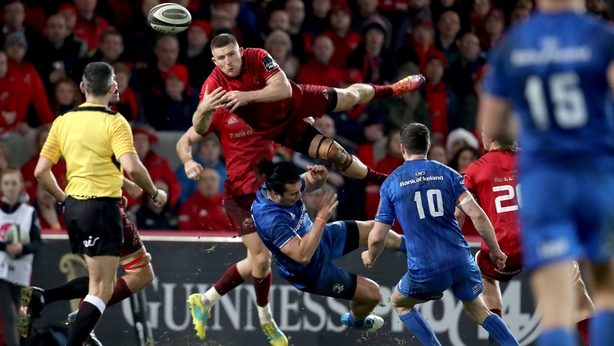 Contepomi insists that his side can learn lessons from that game, but also claimed that the lack of discipline was not the most frustrating issue for him that defeat.

"I think we’ve a lot to learn, we had a good game plan and went off that for times, but also we had two yellow cards and one red card," he said.

"It’s tough to play with 14-men against a top quality team like Munster. But still we were in place to win the game.

"We need to learn a bit more composure, knowing you’re away from home and knowing the way that game was being held and so on.

"We lost a lineout seven metres from their try-line when it was 16-10 and that’s a crucial moment. Then we lost the next line-out as well so maybe that’s more frustrating that any other thing."

Leinster have an immediate chance to make amends for that display in Thomond Park, but Contepomi warned that his side are in for a tough physical test against Ulster.

"When you play inter-pro’ games, everyone wants to put their hand up and it’s their man-to-man competition for Irish sport," he said.

"We expect a very tough game, a physical game definitely. Ulster are a very physical team, they play very hard and we’ll prepare for one of those games.

Leinster are hoping to bounce back from their Pro14 defeat to Munster when they take on Ulster on Saturday. #rterugby pic.twitter.com/xQt7vKv6dg