Leinster captain Jonathan Sexton said that he was disappointed with his side’s discipline during their 26-17 Pro 14 loss to Munster at Thomond Park.

In a tempestuous first-half, Leinster had James Lowe sent off as well as Cian Healy and Tadhg Furlong sin-binned.

"It’s hard to play with 14-men, I was proud of the lads the way we dug it out,"Sexton told RTÉ’s Michael Corcoran after the game.

"You can’t do the moves that you prepped, you can’t play the way you want to play when you are down to 13 or 14 men, that’s what cost us, the three moments in the game where they were sort of accidental.

"There were other moments in the game where our discipline wasn’t good enough really, that’s what you can take out of the game.

"The frustration from my point of view was that the reversed a penalty against me for retaliation, but for some reason the other penalties weren’t reversed for the same thing.

"That’s my only small thing, the decisions were correct to send off James and to issue yellow card the others.

"They were accidental things, but there were other moments in the game where we gave away penalties aswell." 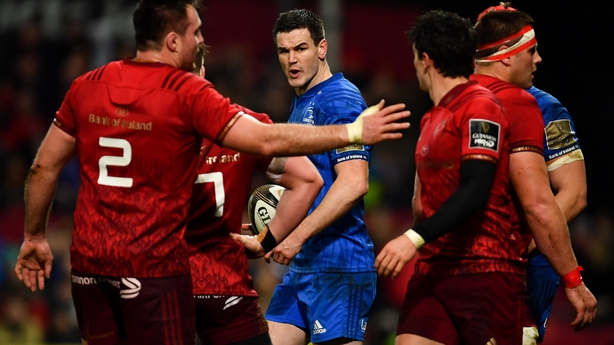 Although Munster had a 13-3 lead at the break, Leinster mounted a comeback with a try from James Tracy to bring them back into the game.

"I was very proud of the lads effort, we got ourselves back into the game, we kept them out of our line with thirteen men, and we defended well with 13 men at times.

"Then we dug deep with 14 men for the rest of the game and got ourselves back into the game at 16-10 obviously then we decided to go for the corner because when you are down to 14 you are not going to get too many chances to try and win the game so if we could have snuck a try there and kicked a conversion that would have put us ahead with 20 or 25 left to play.

"They are the decisions you have to make and it didn’t come off today."

There were plenty of cards and flash points in the game and Sexton believes the rivalry between the two provinces is alive and well.

"Leinster and Munster are always very feisty, people say the rivalry has lost its edge I don’t think it has, it’s just we have had a good run of results against Munster today they beat us fair and square, we will learn from it and come back."