Man of the match Rory O’Loughlin felt that Leinster rectified much of what went wrong last week as they did a Champions Cup double over Bath.

Despite a 17-10 away win in Somerset, the centre felt that there was room for improvement and was glad to help the champions record a 42-15 win at the Aviva.

"It was good to get the result over there but we felt we came off second best at times in the collisions and that was the main focus here today," O’Loughlin told RTÉ Sport.

"We set the tone well quite early in the game by winning those one-on-one collisions and getting over the gain line, which allowed us to get into our flow and get the ball out wide.

"We were pretty happy that we didn’t let up in the second half, we had two or three long defensive sets where we kept them out. It was a more complete performance.

"In the moments that really counted we were clinical and that was the difference this week." 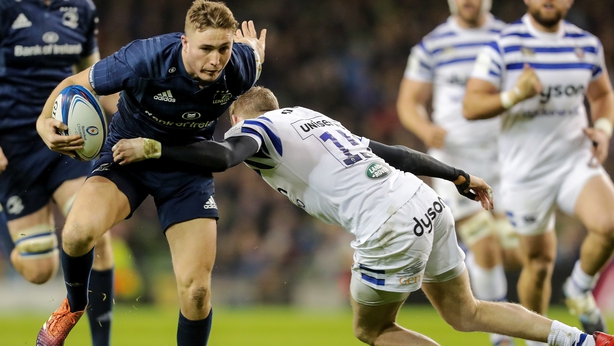 The Dubliner got on the scoresheet himself, on hand to finish off the second try after a fine move that involved Johnny Sexton, Garry Ringrose and Jordan Lamour, for whom he reserved special praise.

"When he has the ball in his hands he is more than likely going to go through a hole somewhere," he said.

"He has that kind of x factor so when I saw him take off I just got as close as possible.

"I thought he was going to go the whole way himself but I was delighted to get over the line."

Bath boss Todd Blackadder said: "Leinster were pretty clinical and took their opportunities. We didn’t help ourselves at times. We were a little bit passive."