Munster suffered a narrow defeat to Castres in appalling conditions in the south of France this evening.

Paea Fa'anunu's first-half try helped the hosts into a 10-6 lead at half-time.

Johann van Graan's side had cause to rue their waywardness from the kicking tee with Joey Carbery enduring an off day and Conor Murray also missing a long range effort. 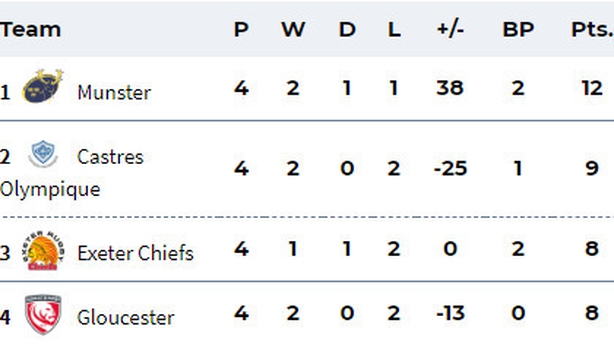 Every one of the 14 round-four games they have played has been won by the home side - as the Top 14 champions moved into second spot in a pool in which just four points separates all four sides with two rounds to play.

Castres' tactics had not evolved much since last week's 30-5 defeat at Thomond Park, and despite a complete overhaul of the hosts' front row,

Munster had the upper hand in the scrum. This time, however, Castres were hitting the tackles and breakdowns harder.

Benjamin Urdapilleta for Castres and Munster's Carbery - back in the starting line-up following JJ Hanrahan's man-of-the-match heroics last week - traded early penalties before the Top 14 champions' scored the only try of the game in the 23rd minute. 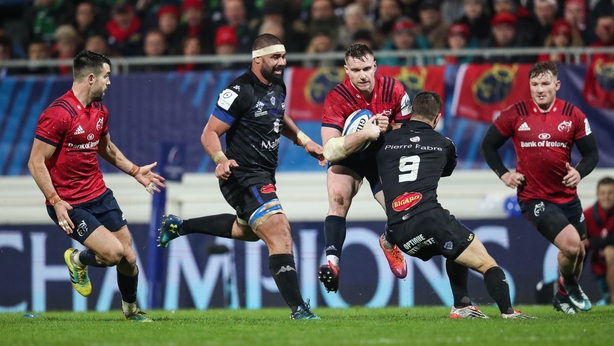 In truth, they could have been over two minutes earlier. Scrum-half Rory Kockott slipped his defender, offloaded to Scott Spedding, who passed out of the tackle to hooker Kevin Firmin with the line beckoning.

But superb Munster defence kept Castres out, until Fa'anunu - after concerted and patient pressure - forced his way over from close range. That score gave the hosts' a 10-6 lead at the end of a niggly opening period in which there had been plenty of off-the-ball activity.

Kockott, who perhaps should have been off the pitch for an earlier, more serious, infringement, was sent to the bin on the stroke of half-time, after he slapped the ball out of opposite number Murray's hand five metres from the hosts' line. 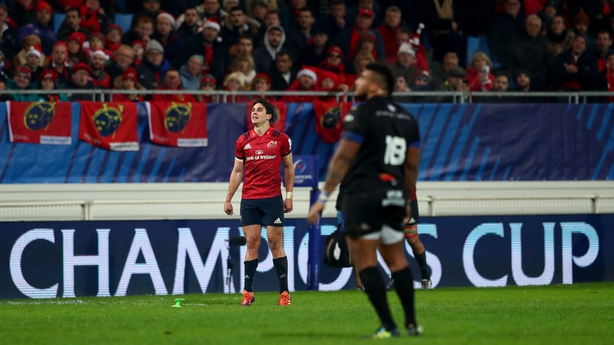 Munster maybe should have opted for three easy points to take the half-time score to 10-9 but they instead went for glory with Castres' defence holding firm.

The hosts survived all of the 10 minutes Kockott was in the bin without conceding a point, as Carbery missed a straightforward kick at goal and Munster failed to make their advantage tell.

Shortly after Kockott returned however, Castres were penalised again, and Carbery made it 10-9.

Urdapilleta restored Castres' four-point cushion from the kicking tee after the visitors' hooker Niall Scannell was sent to the bin for one infringement too many at a maul - before Murray missed a chance to cut the deficit from halfway.

Carbery closed the gap to one point again as a tension and adrenaline-fuelled match entered its final quarter. 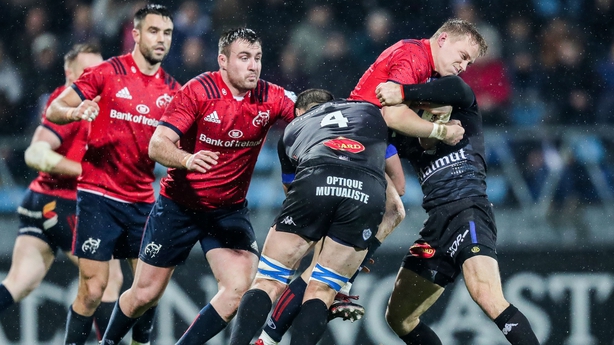 A kick-and-chase touchdown from Andrew Conway with 10 minutes left on the clock seemed to have sealed the game for Munster - but replays showed he had knocked on.

The drama was far from over. Castres' replacement hooker Marc-Antoine Rallier was sin-binned for a dangerous tackle on Peter O'Mahony three minutes after coming on, leaving the hosts to finish the game with 14 players.

But Carbery missed the following penalty, and that would be Munster's final scoring chance as the 14 men of Castres again held firm.